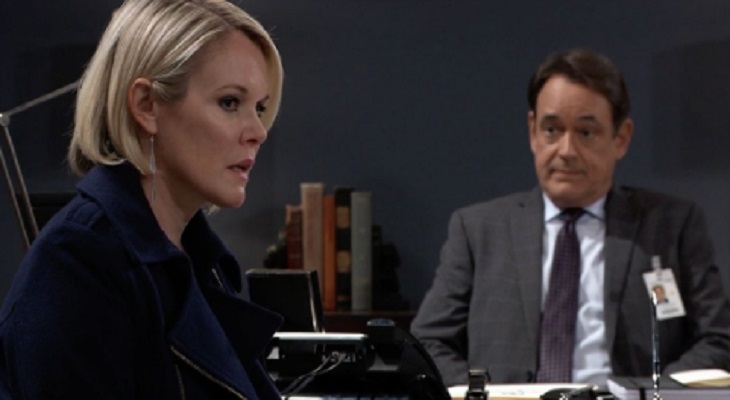 General Hospital spoilers tease that Ryan Chamberlain (Jon Lindstrom) may be choosing his next victim. Ryan (acting as Kevin Collins) just had a major blowout with Ava Jerome (Maura West) over his treatment of Franco Baldwin (Roger Howarth). Ava was upset that Ryan had suspected Franco of being the Port Charles serial killer but had not mentioned it to her.

This led to a vicious fight between Ava and Ryan that culminated in Ava telling “Kevin” that she didn’t like him very much. Once Ava left, Ryan lost it and had a serious meltdown during which he flung all the items on his desk onto the floor. He’s pathologically obsessed over Ava and feels like he absolutely cannot lose her under any circumstance.

Then, to make matters worse, Ryan spotted Ava being comforted by Griffin Munroe (Matt Cohen). Ava just happened to bump into Griffin after her argument with Ryan and the two embraced, mostly out of shock since they had both just learned that Franco was the PCPD’s main suspect. Ryan was furious to see that embrace, given the ominous look he shot at Griffin.

Of course, none of this bodes well for Griffin, especially since GH spoilers say that Matt Cohen will soon be leaving the show. Will Griffin be Ryan’s next victim? It’s certainly looking that way, since Ryan is clearly jealous of Ava and Griffin’s connection. And we know that Ryan doesn’t handle jealousy or anger particularly well.

For Ryan, there will be one and only one solution to his Griffin problem, and that’s to get rid of Griffin permanently. He’ll need to be careful, though, if he wants to eliminate Griffin without getting caught. He’s liable to attack Griffin in a jealous rage, but that would be messy and would likely leave a lot of forensic evidence at the scene.

Ryan will need to get a grip on his anger and feelings of jealousy before he goes after Griffin…that is, if he can. If Ryan ends up going bonkers on Griffin and kills him in a violent rage, then Ryan could be at risk of being caught. And after all the hard work that Ryan has put into framing Franco for his prior murders and Lulu Falconeri’s (Emme Rylan) attempted murder, Ryan won’t want to mess everything up now.

Do you think Ryan will be able to restrain himself, or will he go after Griffin in a jealous rage?

“Turns out, you won’t be railroading my son after all.” #GH55 pic.twitter.com/H66bgkN1kp