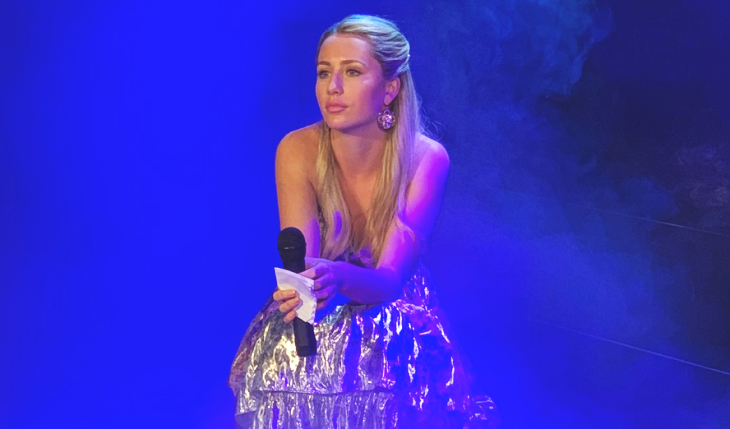 Chase wants to know if Ava has somewhere she can go, she calls for her cabin property to be opened up. Scott runs into Ryan backstage, and Ryan knocks him out. Scott tells the cops that Ryan attacked him.

General Hospital’s Nina Reeves (Michelle Stafford) is furious about her run-in with Willow Tait (Katelyn MacMullen) and tells everyone at her table so. Michael Corinthos (Chad Duell) asks Nina if she’s talking about Willow.

Michael asks if Nina is the reason that Willow was fired. Nina tells everyone about Willow giving up her child. Michael asks Sasha Gilmore (Sofia Mattsson) to excuse him while he checks on something. Nina continues to drink, and Valentin Cassidine (James Patrick Stuart) and Sasha try to calm her.

General Hospital’s Ned Quartermaine and Olivia Quartermaine perform at the ball. Valentin sings next to cheer up Nina. Olivia approaches Chase and Valerie Spencer (Paulina Bugembe) and asks why the cops are all over the hotel. Chase explains to them that Ryan is alive. Ava leaves the ball and goes to her cabin; she knows Ryan will follow and pulls out her gun. Ryan walks up behind Ava as she takes a drink.

General Hospital’s Lucas Jones (Ryan Carnes) questions Sam McCall (Kelly Monaco) about DOD and their classes. Sam talks about how it calms her to watch her kids sleep. Sam credits Shiloh Archer (Coby Ryan McLaughlin) for calming Brad Cooper (Parry Shen) and wonders where he disappeared to when he left the table. Shiloh joins the table and tells everyone about his child. Shiloh knows his child is out there and he’s going to find it. Sam chases down Shiloh and tries to calm him down. Lucas tells Brad he just had a thought about Shiloh and Willow.

If you've ever wondered what goes into bringing the #NursesBall to life, look no further! @IngoRademacher #GH #BehindTheScenes pic.twitter.com/FJk5ZNTMeE

Michael tells Shiloh he has pushed it too far and needs to leave town. Shiloh says he’s a father and isn’t going anywhere. Michael wants to contact Chase; Willow says no. Shiloh begs Sam to go back to the DOD house and finish her initiation. Willow tells Michael that she lied to Shiloh and he’s coming after the baby. Brad tries to get Lucas away from the ball, Lucas demands Brad listen to him.

General Hospital’s Lucy Coe (Lynn Herring) tries to get Jocelyn Jacks (Eden McCoy) to perform Jocelyn says she can’t. Cameron Webber (William Lipton) blames himself, but Sonny Corinthos tells him he had no choice but to deliver Oscar Nero Quartermaine’s (Garren Stitt) message. Jocelyn hears Oscar’s message over but apologizes for not performing. Sonny goes to Jocelyn and talks to her about a friend that died. Sonny knows that Oscar would want Jocelyn to smile and be happy. Sonny says Stone Cates (Michael Sutton) is always there when he needs him.

Sonny tells Jocelyn that Oscar is doing the same thing for her. Jocelyn hugs Sonny. Ryan hears Lucy complaining about being a number short, Epiphany Johnson (Sonya Eddy) tells Lucy she will answer to her if she doesn’t back off Jocelyn. Jax encourages Jocelyn to follow her heart and do what feels right. Jocelyn is introduced as the next performer and takes the stage. Jocelyn sees Oscar in the back of the room as she sings to him.

Everyone congratulates Jocelyn on her performance. Jocelyn tells Sonny he was right; Oscar was there when she needed him. Lucy prepares to close the ceremony and thanks everyone for their help and donations. Kevin is found hanging in a straight jacket from the rigging in the ballroom.