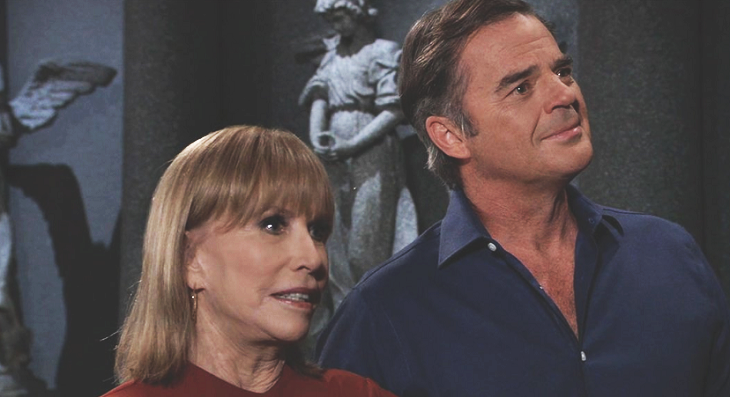 Today is Lila Quartermaine’s (Anna Lee) birthday, Monica and Ned share stories of the past. Monica says they have spent enough time with ghosts and says goodnight to the family. She wishes Lila a happy birthday, and they turn to leave. Monica says when her time comes, it will be one hell of a reunion.

General Hospital’s Jocelyn Jacks (Eden McCoy), Kim Nero (Tamara Braun), and Drew Cain (Billy Miller) sit with Oscar as he sleeps. Jocelyn falls asleep while reading to Oscar. Lila appears at the foot of Oscar’s bed. Oscar asks if he knows her, they never met, but he thinks he does. Lila puts her hand on Oscar’s heart; Oscar screams for Jocelyn to wake up. He doesn’t understand it, but he feels like he is going to be ok. Oscar stands up to show them he is feeling better.

General Hospital Spoilers: Shiloh Beaten Up – But Who Did It?

General Hospital’s Kim and Drew leave as Jocelyn reads to Oscar. Kim talks to Julian Jerome (William DeVry) who promises to be there if she needs him. Kim tells Drew that Oscar is fighting with all he has, but it’s a losing battle. Drew says Oscar needs some magic right now.

Oscar wakes up and sees Jocelyn sleeping and smiles. Oscar passes away and kisses Jocelyn on the cheek before moving on with Lila and Edward Quartermaine (John Ingle). Jocelyn wakes up and realizes that Oscar has died. Kim shudders as Oscar takes his last breath and asks Drew if he felt that.

General Hospital’s Terry Randolph (Cassandra James) and Liz Baldwin (Rebecca Herbst) discuss Oscar, no matter how she puts the pieces together, the story ends the same way. Liz tells Terry she makes the kids she can’t save passing easier. Terry asks Liz for a rain check on the drink. Liz assures Terry she did everything possible for Oscar. Terry knows, but thanks Liz for saying it.

General Hospital’s Sonny Corinthos (Maurice Benard) and Carly Corinthos (Laura Wright) are at General Hospital; she is looking at the babies in the nursery. Sonny and Carly talk about Jocelyn losing Oscar. Sonny offers Carly his support in getting Jocelyn through this. Carly and Sonny leave the hospital and head for home.

General Hospital’s Cameron Webber (William Lipton) and Trina Robinson (Sydney Mikaya) are at Charlie’s working on his paper. Cameron goes to get onion rings and changes his mind, he asks for a chocolate volcano. Julian says Oscar’s favorite and goes to get it. Trina reads Cameron’s paper; it is about Oscar.

At General Hospital, Monica tells everyone that people usually rally before they die; it’s their chance to say goodbye. Monica says this means the end is near. Oscar is wheeled out to meet the family and Terry is talking about his tests. The tumor is all but gone, there is scar tissue, but Oscar is in remission. He asks if he can get up out of the chair; everyone is crying. Kim hugs Oscar; he’s healed. Liz walks up to see what is going on.

Drew and Kim are coming to terms with the reality of Oscar's prognosis. @TamaraBraun #BillyMiller
Tune into an emotional, new #GH – STARTING NOW on ABC! pic.twitter.com/uETx0DrN09

General Hospital Spoilers – What Could Have Been

Kim tells her Oscar has been cured. Drew tells Oscar this is the first day of the rest of his life and asks what he wants to do. Everyone goes to Charlie’s for chocolate volcanoes. Oscar visits with the family and tells them everything he wishes he had said, but Lila and Edward wait for him to say his goodbyes. Oscar sees Sonny and Carly with their baby in the future. Oscar sees Jocelyn and Cameron’s graduation day.

Jocelyn comes up to Oscar and asks what he wants to do tomorrow and the next day and the day after that. Oscar tells Jocelyn he needs to go home now. Jocelyn and Oscar walk outside, and she asks if he’s tired. Oscar knows why he was given this time; he didn’t want to go. Oscar says he has had more happiness than most people have in a lifetime. Lila and Edward walk outside and pass Oscar and Jocelyn.

As always, more detailed spoilers and a full collection of pictures for the week in question will appear here on Soap Opera Spy, when there could be more clues and hints over exactly what’s going on.
General Hospital airs weekdays on the ABC network.

Bold And The Beautiful Spoilers & Recap Wednesday, May 1: Sally Is Angry – Liam Visits The Girls