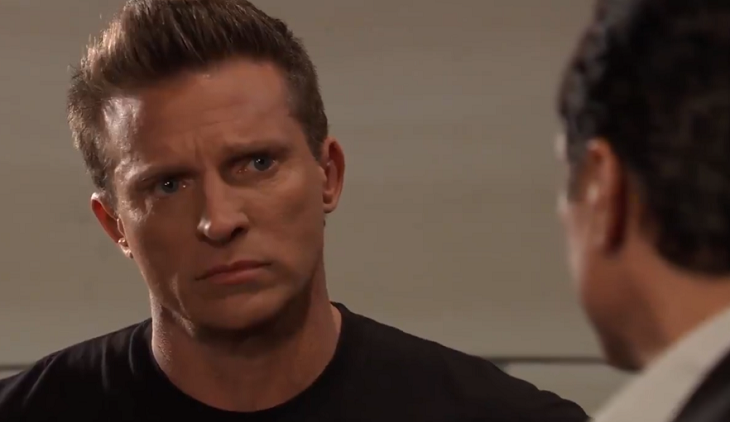 Julian says you can’t help someone who doesn’t want it. Ava Jerome (Maura West) walks in and wants to make sure Julian gave Curtis severance pay as well. She tells Julian that Ryan Chamberlain (Jon Lindstrom) is dead. Ava calls Julian and tells him she had everything under control.

General Hospital’s Laura Webber (Genie Frances) and Kevin Collins (Jon Lindstrom) discuss Ava’s plan. Kevin is shocked the Laura want to go along with this plan. Laura tells Kevin they need to divorce to do this. Kevin calls Ava and tells her he and Laura are on board with her plan.

Ava joins Kevin and Laura, and they discuss details. Laura wants to establish boundaries before this plan begins. Laura doesn’t want Ava to get attached to Kevin; this ends if Ava doesn’t stick to the project. Ava tells Laura when she looks at Kevin; she sees the man that killed her daughter. Laura wants to stage a public fight; Kevin has other ideas. Kevin and Laura go home and begin to make love. 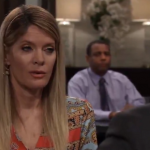 ‘General Hospital’ Spoilers: Aiden Open Up To Nina About Being Bullied, She Finally Gets It!

General Hospital’s T.J. Ashford (Tajh Bellow) confronts Jordan Ashford (Briana Nicole Henry) about her remaining kidney; he knows she may lose it. T.J. tells Jordan she will die if they don’t find a donor in time. Jordan refuses to let T.J. say anything to Curtis about her situation. Jordan tells T.J. that Curtis is picking her up at the hospital and she doesn’t want anything said to him.

T.J. is furious that he is forced to keep the truth from Curtis. Curtis invites T.J. to join him and Jordan for dinner, he declines. Curtis tells T.J. he is heading to Canada and invites him to eat with him and Jordan first and asks him to look after Jordan, he agrees.

General Hospital’s Harmony Miller (Inga Cadranel) tells Willow Tait (Katelyn MacMullen) if it weren’t for her Shiloh Archer (Coby Ryan McLaughlin) would know she was pregnant when she left DOD. Harmony says she found Willow’s pregnancy test when she went and hid it from Shiloh. Willow tells Harmony she was pregnant with a boy and lost it.

Harmony won’t tell Shiloh about the baby; she wants Willow to do that. Willow tells Harmony she doesn’t wish for Shiloh to know about that child. Willow says Harmony would pimp out her daughter to get Shiloh’s approval. Harmony goes back to DOD and tells Shiloh she can’t get through to Willow. Harmony tells Shiloh it’s time she goes back to Beecher’s Corner.

General Hospital’s Shiloh takes Sam McCall (Kelly Monaco) to the attic; she begins unbuttoning her blouse. Shiloh questions if Sam is ready. Shiloh takes over with Sam’s shirt when Valerie Spencer (Paulina Bugembe) knocks at the door and enters the DOD house. Valerie starts to call out to Kristina Corinthos-Davis (Lexi Ainsworth), Sam and Shiloh hear her.

Shiloh and Sam join Valerie downstairs. Valerie claims she wanted to check on Kristina. Sam tells Valerie that Alexis says Kristina is taking a trip. Sam tells Valerie that Kristina is with friends. Valerie asks Sam to tell Kristina to call if she hears from her. Shiloh tells Sam she did great with her willingness to shed boundaries and he thinks they are ready to move to the next level. He can’t wait to welcome Sam to their family. Shiloh wants Sam to go home and wait for instructions.

General Hospital’s Jason Morgan (Steve Burton) approaches Sonny Corinthos (Maurice Benard) and tells him Brick (Stephen A. Smith) has proof that Shiloh drugged Kristina. Sonny sees Brick’s report and tells Jason to eliminate him. Jason understands that Sonny wants to take Shiloh out because he drugged Kristina, but he thinks it will do more harm than good. He explains that Kristina could always turn to Sonny in the past and if he alienates her, she will have nowhere to go.

Jason wonders if it might help to tell Kristina what would have happened at the ceremony. Sonny tells Jason that Neil Byrne (Joe Flanigan) says they cannot keep pushing Kristina. She calls Jason and is in tears when he gets to her. Sam doesn’t know how much longer she can do this. She tells Jason she found the room where the pledges are kept. Sam tells Jason that Shiloh showed her the attic today. She tells Jason about the scene with Shiloh. Jason tells Sam about the narcotics. Sam has to get enough evidence to take down this sleazy bastard. Michael meets Sonny and warns him about Harrison Chase’s (Josh Swickard) suspicions.

Neil and Alexis Davis (Nancy Lee Grahn) talk about how she needs to call Molly Lansing-Davis (Haley Pullos). Alexis looks for her phone and realizes it is inside the safehouse. Kristina has the phone and is talking to Valerie telling her she needs help. Alexis grabs the phone before Kristina can tell her where she is. Alexis demands to know who Kristina has called.

Kristina tells Alexis she doesn’t have to tell her a damn thing. Neil accuses Alexis of leaving the phone on purpose to spare Kristina the pain they are putting her through. He believes that Alexis is doing this to sabotage herself. Alexis reminds Neil he is a part of this kidnapping.

Neil doesn’t want to lose someone else to this. He refuses to talk to Alexis about his personal life. Neil tells Alexis that Kristina has a sound support system. Kristina listens in on Neil and Alexis’ conversation. Alexis says she wants her daughter back and hugs Neil.

General Hospital’s Chase demands to know what Michael and his family have done with Kristina. Michael tells Chase that Alexis has spoken to her and says Kristina is okay. Chase tells Michael if they took Kristina is it kidnapping and false imprisonment. Valerie tells Chase that Kristina called her. Valerie tells Chase she thinks someone hung up the phone on Kristina. Chase is shocked to learn that Sam was with Shiloh. Chase tells Valerie they need to investigate Kristina’s disappearance.