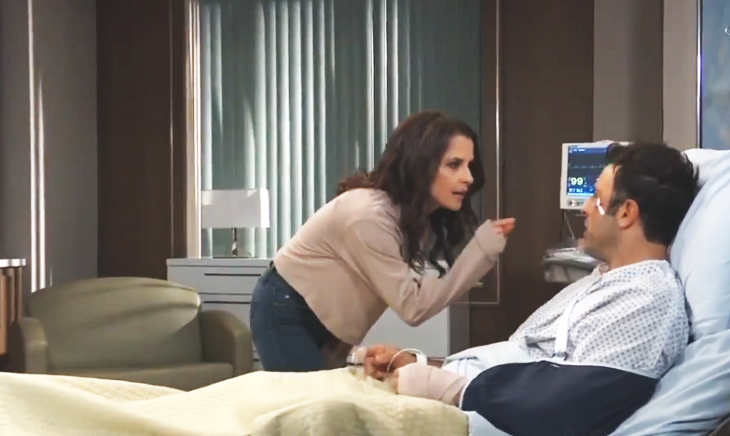 Scott Baldwin (Kin Shriner) arrives and demands she let him represent her. Scott demands Ava plead not guilty to attempted murder. Ava tells Scott that would be a lie, she wanted Ryan dead, that was the plan all along. Julian Jerome (William DeVry) arrives, and Scott informs him that Ava stabbed Ryan. Julian tries to talks Ava out of confessing.

Ava says she wasn’t insane; she meant to kill Ryan. Julian explains that if Ava wants revenge, she needs to stay out of jail to finish what she started if Ryan lives. Ava says it never occurred to her that Ryan might live. Scott comes in, and Ava agrees to plea not guilty. Ava tells Scott to start earning his money.

General Hospital’s Jordan Ashford (Briana Nicole Henry) wakes up and asks Curtis Ashford (Donnell Turner) what happened. Curtis tells Jordan that Ryan is in surgery because Ava stabbed him. Jordan wants to know what Curtis isn’t telling her. Curtis tells Jordan that the dialysis caused a heart attack. Jordan realizes her kidney will fail without the dialysis treatment.

Curtis promises to find a way to save Jordan. Monica arrives and tells Jordan she has to take a leave of absence until she receives her kidney. Jordan has a fever and elevated blood pressure. Monica goes to check on Ryan’s condition. Jordan doesn’t know what is worse, her heart issues or having to take a leave of absence. Monica says Ryan is out of surgery, Jordan questions why he would give her a kidney.

General Hospital’s Monica Quartermaine (Leslie Charleston) speaks to Drew Cain (Billy Miller) before his trip. Drew wants Monica’s blessing to scatter Oscar Nero Quartermaine’s ashes in Africa. Monica agrees but wants to put a plaque in the crypt for him. Jason Morgan (Steve Burton) arrives and interrupts. Jason asks if Drew needs anything while he is gone. Drew suggests Jason start on the treehouse. Jason promises to order the supplies and have them waiting when Drew returns. Jason tells Monica he needs the test results ASAP. 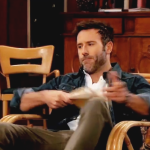 General Hospital’s Jason leaves Sam McCall (Kelly Monaco) to check on her toxicology report. Sam visits Shiloh Archer (Coby Ryan McLaughlin) who thinks Jason failed to keep them apart. Shiloh tells Sam he’s glad she is a true believer. Sam informs Shiloh that he is in love with himself and loves to hear his own voice. Shiloh is stunned when Sam tells him it’s game over and you lose. Sam tells Shiloh she is sick to death of hearing his voice. Shiloh says Sam willingly drank the tea.

Jason joins Sam and exposes the fact that they have a recording of him pushes her to drink it. Jason says they have him for abduction, attempted rape and drugging, Shiloh is going to prison for a long time. He and Sam want Kristina’s pledge, or they turn the evidence over to the cops. Shiloh agrees to give up the pledges and tells Sam and Jason they are in the lighthouse.

Sam and Jason go to the lighthouse, and she relives the night before with Shiloh. She tells Jason that Kristina would have been alone in this. Sam and Jason begin to search for the pledges. She and Jason find the pledges and opens Margaux Dawson’s. Sam believes Shiloh is finally finished, Jason says not yet.

General Hospital’s Julian thanks Alexis Davis (Nancy Lee Grahn) for her help with Kim and Drew’s paperwork and for getting him out of jail. Kim overhears and questions Julian’s arrest. Julian tells Kim that he took a swing at Kevin Collins (Jon Lindstrom) and the charges were dropped.

Scott calls Julian to come to Ava at the station. Kim wants to go with Julian, but he reminds her she has a plane to catch. Julian promises to be waiting for Kim when she returns. Meanwhile, Jocelyn Jacks (Eden McCoy) stops by to see Kim before she leaves. Kim gives Jocelyn Oscar’s guitar. Drew shows up to get Kim and they tell Jocelyn about their trip. Jocelyn leaves to go to the park and play for Oscar. Kim and Drew leave for Africa.

General Hospital Rumor: Ryan Uses His Kidney To Plea Bargain, Will The Serial Killer Get A Break? https://t.co/weR6Osxqc0 pic.twitter.com/YCBRcXiVeU

General Hospital’s Neil Byrne stops by Alexis’ for an update on Sam’s plan and finds out Sam was drugged but OK. Neil tells Alexis that she is his priority. Alexis tells Neil it’s been a long time since she’s been anyone’s priority. Kristina tells Alexis and Neil that there is more about DOD that they don’t know. Kristina starts to talk about the offering she gave Shiloh. Kristen tells Alexis and Neil the pledge is about her family. Alexis tells Kristina they will deal with whatever she told Shiloh. Neil excuses himself. Alexis tells Kristina that Sonny will take care of whatever she told Shiloh. Kristina tells Alex the secret isn’t about Sonny. Alexis realizes the secret is about her.