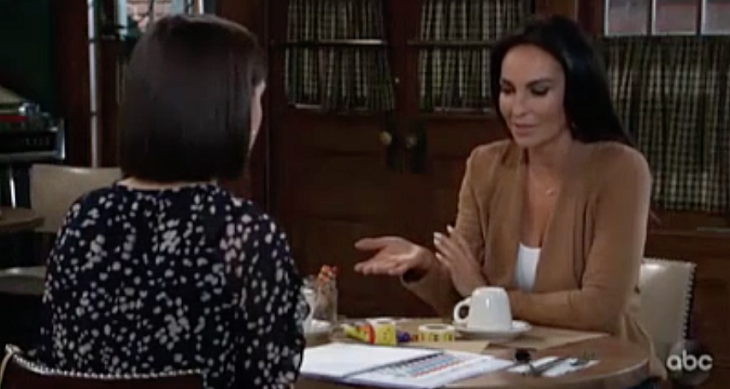 Felicia is more than ready to take capturing Ryan into her own hands. She's seen what he can do and refuses to let it happen again.
A thrilling, new #GH starts RIGHT NOW on ABC! @KristinaWagnr pic.twitter.com/KkbJKYxu7O

Kristina claims to be fine at DOD, and she doesn’t need anything more. She demands to be released to go back to DOD. Kristina says she can leave DOD whenever she wants. Michael wants to know if Kristina knows what happens after she joins the trust. Michael starts to tell her, but Sonny stops him. Kristina tells Alexis she will have her arrested for kidnapping.

General Hospital’s Sam McCall (Kelly Monaco) tells Shiloh Archer (Coby Ryan McLaughlin) she wants to take the next step. Shiloh tells Sam she will soon assume her place in the trust beside of him. Sam questions what the trust is.She asks Shiloh what she has to do to join the inner circle. Sam wants to know what she has to do to get into the select group. Harmony Miller (Inga Cadranel) interrupts, and Sam plays Shiloh against Harmony asking who is in charge. Shiloh urges Harmony to accomplish her task. 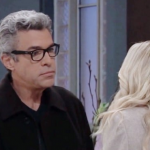 Shiloh helps Harmony to “recover her strength,” Sam looks confused. Sam questions what she saw. He believes it’s time to remedy Sam’s inquisitiveness. He tells Sam he thinks she would make an excellent addition to the trust. Shiloh tells Sam she will find out the rest later.

Shiloh asks Sam if she’s ready for the next step, she says yes, Shiloh unbuttons his shirt and throws in on the table. He wants Sam to reveal herself to him. He takes Sam to the attic and lets her what she needs to do. Sam turns on her phone and puts it in her pocket as she begins to unbutton her shirt.

General Hospital’s Harrison Chase (Josh Swickard) and Valerie Spencer (Paulina Bugembe) are getting food; he stops to talk to Willow Tait (Katelyn MacMullen). She tells Chase she wanted to help a friend, but she isn’t ready to hear her yet. Willow is sorry she and Chase couldn’t be together last night. Willow promises to check in with her friend and get back to him about tonight.

Harmony approaches Willow and says it has been a long time. She asks how Willow has been and tells her DOD will take her back no matter what she calls herself. Harmony tells Willow she caused an uproar when she left. Harmony claims that Willow needs a teacher. She will not teach Shiloh’s doctrine.

Kevin reaches out to Ava gets more than he bargained for. Will he be willing to step in where Scott wouldn't?
A dramatic, new #GH starts RIGHT NOW on ABC! @thejonlindstrom pic.twitter.com/Oag9y1J4Xw

Willow tells Harmony she wants no part of DOD and says Harmony gave her to Shiloh. She tells Harmony her mother and was supposed to protect her. Chase calls Michael to meet him at the Floating Rib while Valerie goes to the DOD house. Kristina calls Valerie from Alexis phone before she can enter. Chase asks Michael what his family has done with Kristina.

General Hospital’s Molly Lansing-Davis (Haley Pullos) and T.J. Ashford (Tajh Bellow) are discussing Kristina’s situation when Curtis Ashford (Donnell Turner) interrupts to question him about some medications. T.J. tells Curtis one pill is an antibiotic, the other deals with blood clotting. T.J. asks if someone lost a limb.

Curtis explains it is related to a case and he will keep T.J. updated. T.J. wonders if Jordan is as well as she says. Curtis told T.J. about Jordan’s dizzy spell the other day. Chase and Valerie are talking outside when Molly and T.J. arrive. Valerie asks how Kristina is doing; Molly says she left the DOD house two days ago. Chase seems to be confused by Molly’s statement.

General Hospital’s Felicia Scorpio (Kristina Wagner) and Laura Webber (Genie Frances) discuss Ava Jerome’s (Maura West) plan to take down Ryan Chamberlain (Jon Lindstrom). Laura understands Felicia and Ava’s need to be proactive, but she wants to live her life. She gives Laura a book and tells her this is what living in fear is. Felicia tells Laura that is her nightmare journal.

Felicia says it gives a starting point to discuss what is going on with her feelings. She urges Laura to help her and Ava for Lulu Falconeri’s (Emme Rylan) sake. Kevin Collins (Jon Lindstrom) approaches Laura and tells him about Felicia’s plan. Kevin tells Laura that Ava tries to do the same, Jordan calls and informs Laura she is sending Curtis to search for him. He thinks Ava’s plan is too dangerous. Laura tells Kevin it might work because of the danger.

General Hospital’s Kevin tells Ava she can put Ryan behind her; he is most likely dead. Ava tells Kevin that Ryan is out there waiting and he is going to help catch him. Ava wants to plan a funeral for Ryan and pretend everyone is moving on with their lives. She is sure Ryan will focus on her, and she will be ready for him. Ava wants Kevin to pose as her lover to capture Ryan.

Kevin doesn’t think Ryan will believe it. Kevin asks Ava what happens if Ryan gets the drop on her, Kevin warns Ava that Ryan murdered others and will murder her. He tells Ava he has too much to lose. Ava is shocked the Laura took Kevin back. Kevin says Ava is not the only account he has to pay and won’t sacrifice his wife for her.

General Hospital’s Curtis tells Jordan Ashford (Briana Nicole Henry) what he found out about the stolen medication. Jordan wants Curtis to go to Canada and find Ryan. Curtis doesn’t want to leave Jordan; she insists she will be fine without him, she has T.J. and Stella Henry (Vernee Watson). Curtis wants no part of going after Ryan, but Jordan says her hands are tied since Margaux closed the case, she needs him to do this. Curtis reluctantly agrees to find Ryan. T.J. gets Jordan’s kidney function results and confronts her about them.