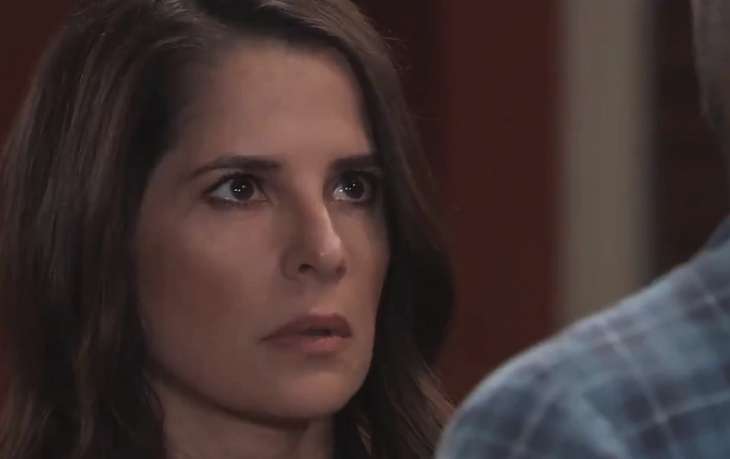 “General Hospital” spoilers for Monday, April 29, tease that Ryan Chamberlain (Jon Lindstrom) will be remembered – not fondly of course! His enemies will gather to smear his name at a memorial service. It’ll all be part of Dr. Kevin Collins (Jon Lindstrom) and Ava Jerome’s (Maura West) plan to lure the serial killer out of hiding.

Some wilted flowers will be dumped on Ryan’s grave in Monday’s GH episode. Laura Webber (Genie Francis) will contend that they won and Ryan lost. “General Hospital” spoilers say some of Ryan’s other victims will be there as well. Felicia Scorpio (Kristina Wagner) will help the gang sell it and hope that Ryan will fall for their trap.

Once this memorial service concludes, maybe Kevin and Laura can focus on staging a breakup. Lucy Coe (Lynn Herring) will voice her displeasure over something on Monday. She’ll be revolted, so it could be because of Laura turning against Kevin or perhaps because she’s let in on the secret plan.

Regardless, Lucy will have more drama to deal with. She’ll have to listen to Franco Baldwin’s (Roger Howarth) strange Nurses Ball pitch, so that should bring some fun scenes. Over with Curtis Ashford (Donnell Turner), he’ll discover a new Ryan clue. Let’s hope it can offer proof of Ryan’s latest location or at least provide a trail to follow.

Other “General Hospital” spoilers state that Shiloh Archer (Coby Ryan McLaughlin) will have a meeting with someone. He’ll agree to help this person and most likely welcome him to Dawn of Day with open arms. Shiloh’s always eager to dupe new followers.

Sam McCall (Kelly Monaco) is tired of Shiloh’s manipulation and knows they’re running out of time. If the cops track Kristina Corinthos-Davis (Lexi Ainsworth) down, they could miss out on their chance to save her. Before Sam does anything else, she’ll want to know what Kristina’s pledge is. She’ll resolve to break into the DoD records room and hopefully get the answers she’s seeking.

Jason Morgan (Steve Burton) and Sonny Corinthos (Maurice Benard) will undoubtedly weigh in on Sam’s scheme. Sonny will also reassure a nervous Dr. Neil Byrne (Joe Flanigan), who’ll fear legal ramifications. Nevertheless, Neil will insist Kristina is the priority. He’ll wonder if Sonny’s wrong about being able to keep the PCPD at bay. There could be disastrous consequences if Kristina’s pulled out of exit therapy too soon.

“General Hospital” spoilers say Margaux Dawson (Elizabeth Hendrickson) will ask Harrison Chase (Josh Swickard) and Valerie Spencer (Paulina Bugembe) what they’ve learned so far. She’ll wonder if they’re sure Kristina’s family is in the dark here. Chase and Valerie will exchange a look as they try to decide how much to reveal. Margaux is involved in DoD and trust Shiloh…or does she?

GH fans can expect a confession from Margaux on Monday. Is her Dawn of Day involvement all a ruse? That’s one possibility to consider since her interest in DoD has always seemed a bit odd. We’ll give you updates as other news and rumors emerge. Stick with the ABC soap and don’t forget to check SOS often for the latest “General Hospital” spoilers, rumors, updates, and news.