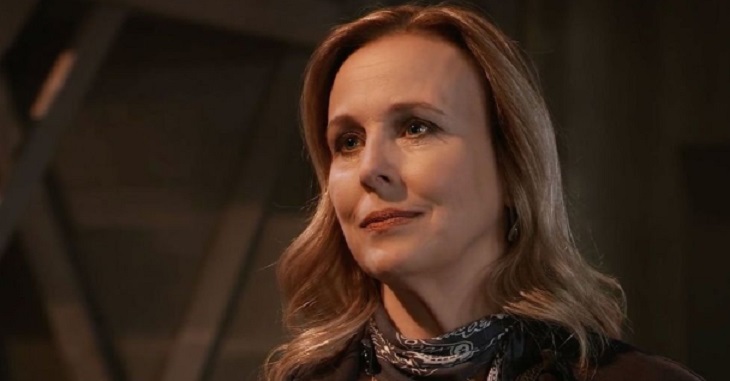 General Hospital spoilers tease that Laura Webber (Genie Francis) will visit Franco Baldwin (Roger Howarth) in jail, where he has been since being arrested for the attack on her daughter Lulu Falconeri (Emme Rylan) and the murders of three others.

Franco had previously been cleared in some of the murders but then the other victims’ drivers’ licenses were found in his art therapy studio at GH! General Hospital viewers know this is a frame-up by Ryan Chamberlain (Jon Lindstrom), who has been impersonating his twin Dr. Kevin Collins!

General Hospital Spoilers – Does Laura Have Doubts About Lulu’s Story?

Could Laura have her doubts that Franco is guilty? She is very close friends with Elizabeth Webber (Rebecca Herbst), Franco’s fiancé and mother of Laura’s grandson Aiden Webber (Jason David).

Undoubtedly, Liz has been talking about how Franco could not have attacked Lulu or murdered the other three.  General Hospital spoilers tease Laura may wonder if Lulu had some false memories or confusion when she named her attacker.

Recovered memory therapy, which is a technique used to “bring up” repressed memories, was once widely used by psychotherapists especially when there was child molestation involved, and people have been wrongly convicted when used in court because the mind tends to be very open to suggestion under hypnosis, and will fill in the blanks with false information or even a person’s own lies or lies they’ve been told and forgotten.

It remains to be seen whether Laura’s visit is to settle in her own mind if Franco could be guilty, or if Lulu’s memory was faulty. She could be there to hear Franco’s side of the story or tell her she knows he’s guilty because she believes Lulu! Keep watching General Hospital and check General Hospital spoilers frequently to see what happens in Laura’s visit with Franco!

Young And The Restless – Remember When? The Start Of Katherine Chancellor and Jill Foster’s Epic Feud