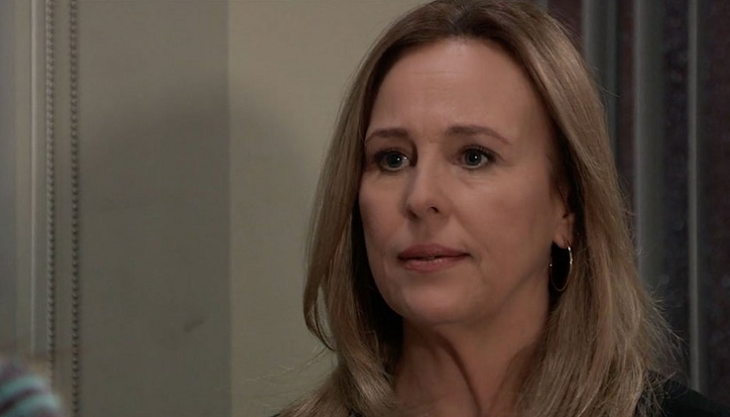 General Hospital spoilers tease that Laura Webber Collins (Genie Francis) can’t shake her anger at Dr. Kevin Collins (Jon Lindstrom) for not at least sharing the important secret of his psychotic twin Ryan Chamberlain’s survival at least with her.

She understands why he wanted to treat Ryan and try to rehabilitate him if possible. This is a trust issue for her, not an issue with Kevin caring about his brother in spite of his glaring, dangerous problems.

Although Kevin may be just a tad on the codependent side. He’s a psychiatrist and should know he can’t fix Ryan if he doesn’t want to be fixed or thinks he needs to be fixed.

Laura feels that if Kevin can’t trust her with a secret that shouldn’t have been a secret to begin with, how does she know he doesn’t have other secrets he’s not sharing with her?

General Hospital viewers know that Kevin’s keeping Ryan’s survival a secret had some far-ranging fallout and people died because of it. Laura’s own daughter Lulu Falconeri (Emme Rylan) was attacked by Ryan and suffered a serious wound, and would have been a murder victim had Ryan not suffered an attack of the blindness virus and passed out.

Franco Baldwin’s (Roger Howarth) brand new marriage may be annulled and his life has been torn apart by having to fake guilt over Ryan’s actions and not be able to tell his wife about any of it until after the fact.

Elizabeth Webber Baldwin, (Rebecca Herbst) who is also Laura’s ex daughter in law, has her own trust issues with him, and they may not be resolved soon either. That’s not even taking into account Ryan’s successful murders, Kiki Jerome (Hayley Erin) and the downward spiral Dr. Griffin Munro (Matt Cohen) seems to have gone into because of it!

It may be a long time before Laura can learn to trust Kevin again and their marriage, even though she loves him, may suffer. Stay tuned to General Hospital and keep checking General Hospital spoilers frequently to see if Laura is able to overcome her anger and forgive Kevin and take him back eventually!

Days Of Our Lives Spoilers: Stefan And Chloe’s Relationship Continues To Sizzle