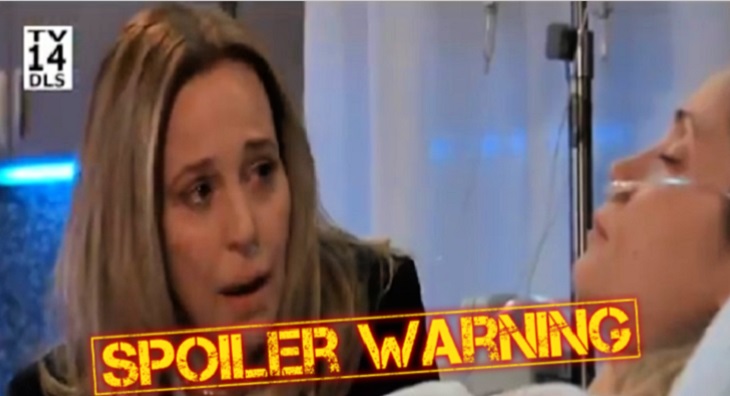 “General Hospital” spoilers for Friday, January 25, tease that Lulu Falconeri (Emme Rylan) will still be unconscious at GH. Her doctors gave her a good prognosis, but Laura Webber (Genie Francis) will remain concerned. She just needs Lulu to open her eyes and prove she’s going to stay with them.

Laura will get emotional as she sits next to Lulu in her hospital room. She’ll plead with Lulu to wake up in these gripping scenes. Sonny Corinthos (Maurice Benard) will pop in and push for the same thing. He’ll want Lulu to keep fighting and be there for her family, which includes currently out-of-the-picture Dante Falconeri (Dominic Zamprogna). He’d be a mess if he knew about any of this.

Meanwhile, Maxie West (Kirsten Storms) will encourage Peter August (Wes Ramsey) to share. She’ll wonder what he’d be focusing on this year – presumably if this serial killer chaos wasn’t weighing on everyone’s mind. Speaking of the serial killer, Ryan Chamberlain’s (Jon Lindstrom) bandages will be taken off following his surgery. Ava Jerome (Maura West) will be eager to find out if “Kevin” can see.

Other “General Hospital” spoilers say Robert Scorpio (Tristan Rogers) will make it back to town. He’ll insist that Dr. Hamilton Finn (Michael Easton) is just the man he’s looking for. They’ll discuss the strange virus and the mystery surrounding it. Robert will hope he can help Finn and Anna Devane (Finola Hughes) crack the case.

Until then, Anna will try to crack a different one. She wasn’t happy about the way Jordan Ashford (Briana Nicole Henry) treated Peter recently. Anna doesn’t think there’s any possibility Peter could’ve attacked Lulu, but Jordan’s just doing her job. She has to work every angle if she wants to get answers.

Anna will work with Jordan in Friday’s episode. It seems Jordan will present a photo of the bloody footprint and ask what Anna thinks about it. The murder weapon was also recovered, so this was certainly a sloppy crime scene. Jordan and Anna will try to figure out why the serial killer suddenly go so careless.

GH fans can also expect fear to strike for Sam McCall (Kelly Monaco). She’ll be worried as Jason Morgan (Steve Burton) leaves the penthouse, but he’ll promise he’s coming back. Jason and Sam just made love, so their connection’s stronger than ever. He’ll want Sam to know he intends to be careful and return to her.

At home, Franco Baldwin (Roger Howarth) and Elizabeth Webber (Rebecca Herbst) will revisit the topic of Aiden Webber’s (Jason David) school issues. The other kids call him “Gayden,” so it’s forcing a conversation about whether Aiden could indeed be gay. Franco will wonder if it’d be a problem for Liz if Aiden was.

Of course, Liz would definitely accept Aiden and give him all the love she usually does. Her main concern will be how Aiden’s classmates might treat him. They’re already bullies over their suspicions, so things could get ugly if they’re proven right.