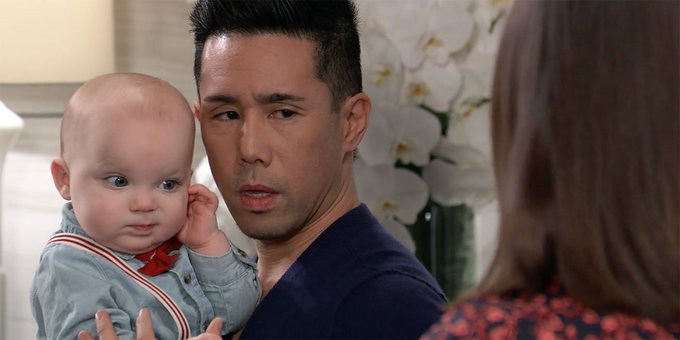 This almost has to be about Wiley Cooper-Jones (Erik and Theodore Olson) but why is Curtis doing the questioning? It could be that Jordan Ashford (Briana Nicole Henry) and Detective Harrison Chase (Josh Swickard) are both tied up with other things, but it must not be a police matter or Curtis wouldn’t be investigating.

Here is how Brad’s week shapes up starting the first of the seven days until when Curtis questions him; Brad requests Julian Jerome’s (William DeVry) help – again. We know that prior to that Nelle Benson (Chloe Lanier) calls him and needs his help, probably to put a good word in for her at her parole hearing. Brad attends her parole hearing.

The next day Lucas Jones (Ryan Carnes) is troubled by what Brad may be keeping from him, and then Curtis questions him the next day! Will Lucas become so suspicious of Brad and hire Curtis to investigate his own husband?

GH Spoilers – Why Is Lucas Suspicious And Concerned?

Why is Lucas suspicious and concerned that Brad is keeping something from him? Has Nelle been in contact other than asking Brad for a helping hand – or mouth? Does Lucas know that Brad went to Nelle’s parole hearing? Did Lucas overhear Brad’s end of the conversation when she called? Has Nelle called Lucas, or possibly sent a letter?

If none of those things have taken place, and Lucas knows Brad went to the parole hearing, why has happened to make him suspicious of him to the point of possibly hiring Curtis to look into it? There is still one situation from several weeks ago that General Hospital has not chosen to address, and that is when Lucas caught Brad looking at the medical records of Wiley, Michael Corinthos (Chad Duell) and Shiloh Archer (Coby Ryan McLaughlin).

Perhaps Lucas has to look at Corinthos’ family medical records, including Michael’s for something concerning Donna Corinthos (Ella and Emma Hulen). Other General Hospital spoilers tease that she’s not quite out of the woods yet and something unrelated to the spina bifida could make her ill and could be genetic through the Spencer side, which would be Carly Corinthos’ (Laura Wright) side.

Whatever the possible genetic condition is, other than the heart defect Michael had, since it only seems to be in males, may cause Lucas to look in the medical records of the whole family and when he gets to Michael’s maybe he notices it’s been tampered with and asks Curtis to investigate and the trail leads to Brad, who has never had the chance to go back in and finish what he started!

Either way, the baby swap secret must come out and it should soon! Stay tuned to General Hospital and keep checking General Hospital spoilers frequently for all the latest news, updates and developments!

Days of Our Lives Spoilers: Ciara’s Family Accepting Ben – Will They Regret It?