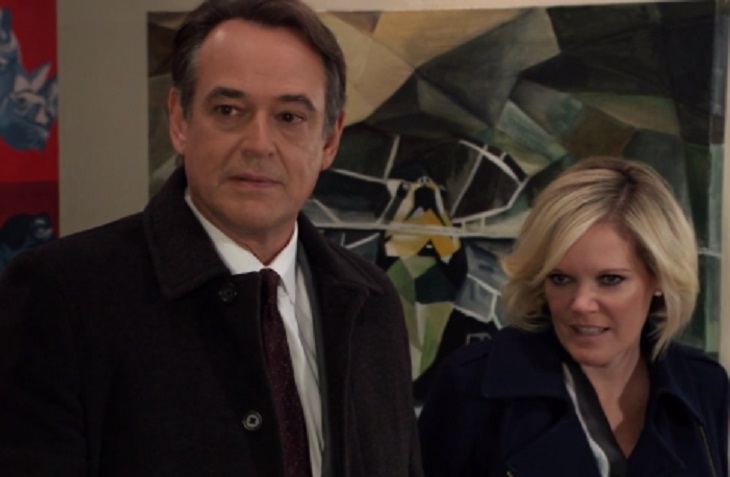 General Hospital spoilers indicate that Ava Jerome [Maura West] is willing to stand by her man, despite the fact that he just happens to be her number one enemy. Little does she know that the man that she’s been sharing her bed with, Ryan, is also the man that is the one who has been secretly carrying out a double life as Port Charles’ most prolific serial killer. Here’s what you need to know.

According to ABC Soaps in Depth, Ryan Chamberlain [Jon Lindstrom] is on a mission and he’s got a new task in mind that he will carry out no matter what. While there a lot of things that can be said about this murderer, there’s no denying that he’s very determined to finish a ‘job,’ so to speak.

Ryan adds another to-do on his list during the Monday, January 14th General Hospital episode. This only means that another Port Charles resident could be living on borrowed time.

Meanwhile, Carly has her guard up during the Wednesday, January 16th episode of General Hospital. If there is one person who has every right to feel suspicious, it’s her. After spending several months in Ferncliff, she can smell fear and trouble from several miles away.

Here’s hoping that she remains on high alert, especially with what Ryan has been up to lately. He’s been working hard to prevent her from connecting him to the mysterious ‘Wilson’ that she encountered during her time at Ferncliff.

Also, it looks like Ryan might be failing to trap Scotty simply because he might be getting ahead of himself. Elsewhere, Ava and Lucy will cross paths while Kevin’s former wife and the woman who currently thinks she is dating him have something to say to one another. Ava though is still standing by her man, despite everything that is going on. She’s not about to give up on the one person who happens to understand her the most.

Let us know what you think in our comments section below. Also, check back with Soap Opera Spy for all the latest news, updates and spoilers on General Hospital and all of your favorite daytime television shows right here!

Days of Our Lives Spoilers: Sarah Blasted for Betraying Eric