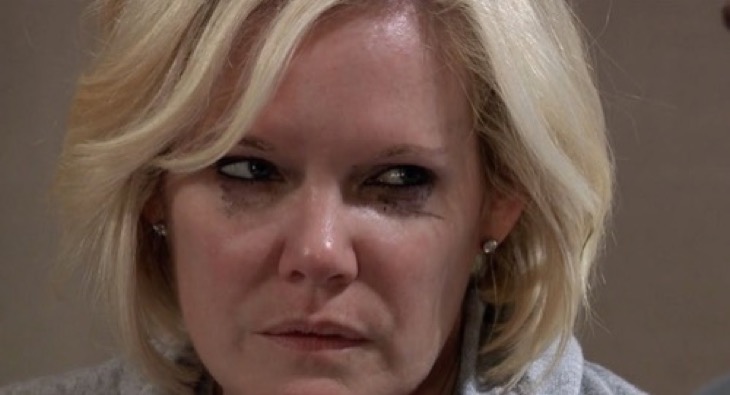 General Hospital spoilers tease the truth will hit Ava Jerome, (Maura West) and hit her hard, once she realizes she was sleeping with, in love with, and nearly married her daughter’s killer! It looks like she has survived physically intact, likely having been hanging onto the railing of the footbridge where Ryan Chamberlain (Jon Lindstrom) made a last minute decision for a murder/suicide, thinking they would be together forever in eternity!

As General Hospital viewers know, he pulled Ava over the edge of the footbridge, thinking they would plunge to their deaths below; or was he? Maybe he was thinking they would both fake their deaths and continue on the run! It appears that Jason Morgan (Steve Morgan) is able to pull Ava back up and save her life, which is only appropriate since she helped him escape from the Boronsky Clinic in Russia!

However, even if Ryan survived and returns in the future to retrieve Ava, he’s going to be in for a big surprise, and it won’t be a pleasant one! Now that Ava knows who he really is (or was) and that he was the one who killed Kiki Jerome (Hayley Erin), he would need to fear for his own life! There are a number of other people who would be out for his blood besides Ava!

Ava will have a hard time dealing with the reality of what has happened; she can’t just shut her love off for him like a faucet, that’s why she wanted to get him some help, telling him he was sick. But that’s when she thought he was Kevin Collins. She couldn’t even go there with her thoughts, that he could really be his serial killer brother, come back from the dead (or never dead at all!), because then she would have to wonder if he was the one who killed Kiki!

It’s a good thing Laura Collins (Genie Francis) just told her who he was, not that he was the killer; she could barely deal with him being A killer at that point! Ava will be full of conflicting emotions, and GH will be full of exciting drama because of it. Keep watching GH and checking General Hospital spoilers frequently to see how this all plays out!

Young and the Restless Spoilers Week Of March 11-15: The Verdict Is In – Shocking Wedding Twist – Kerry’s Shady Scheme

General Hospital Spoilers: T.J. Offers To Test As Kidney Donor For Mom Jordan, Will He Save His Mom?