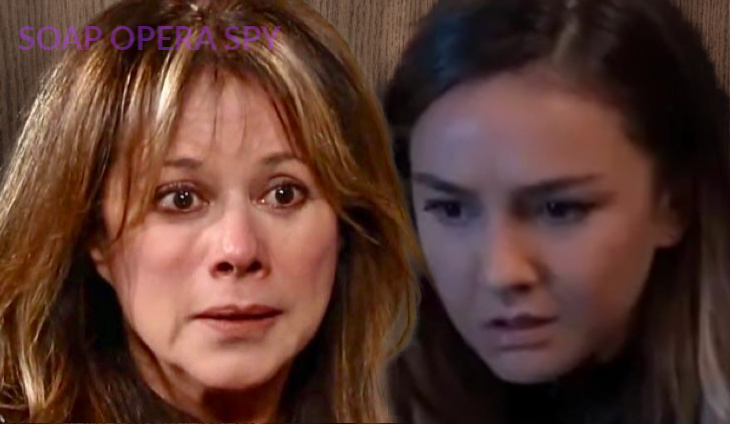 General Hospital spoilers indicate that Alexis Davis (Nancy Lee Grahn) will soon be left shocked over Kristina Davis (Lexi Ainsworth) and her confession. That’s because Kristina is nursing some major concern over the loyalty pledge that she gave to the Dawn of Day cult leader Shiloh Archer (Coby Ryan McLaughlin). However, she doesn’t want to disappoint her mother Nancy any more than she already has, which is putting her in a very difficult position. Here’s what you need to know.

Kristina is left in a position that has her incredibly worried. She’s having a very hard time trying to turn her wrongs into rights, knowing that it might put her loved ones in danger. General Hospital co-head writer Shelly Altman has this to say about Kristina’s predicament: “Here she is on the mend, trying to get her life back together, trying to feel strong, but that pledge to Shiloh’s possession is filling her with anxiety, dread and guilty.”

If that weren’t enough, Alexis is also feeling quite nervous as she is waiting on pins and needles to find out whether or not Sam McCall (Kelly Monaco) and Jason Morgan (Steve Burton) have successfully neutralized Shiloh. Unfortunately, it’s a cat and mouse game they are having a hard time trying to win!

Altman adds, “She knows that there is a plan, she does not know just how deep in danger Sam has been willing to put herself. Nonetheless, she knows Sam and she can’t imagine that Sam is up to anything easy. Despite the fact that she feels Kristina is safe, Shiloh remains the problem that doesn’t go away.”

OMG I loved these Kristina/Josslyn scenes, we need more!! they should be as close as sisters, Krissy's dad and Joss's mom have been married w each other 5 times they are long time step siblings!♥️ & Jax and Alexis are close friends their daughters should be close as well!♥️ #GH pic.twitter.com/kE0TLIvMG1

What’s more, Kristina is very hesitant to tell her mother what is on her mind. “She feels that she has hurt her family enough, and she knows that what she would be telling Alexis could not only hurt her mother but damage their relationship.”

Needless to say, the nightmare with Shiloh and Dawn of Day isn’t over yet. That’s because the controversial cult leader isn’t going anywhere anytime soon, despite everyone’s best efforts to push him out of Port Charles. Of course, fans will have to tune in to find out what will happen next!

Bold and the Beautiful Spoilers: Hope Pushing Steffy To The Brink, Will She Take Liam Back?