General Hospital (GH) spoilers for the week of Monday, May 27, 2019 through Friday, May 31, 2019 tease that we will have a week filled with two getting closer, one bides their time, and let’s not forget plenty of drama. We have a very exciting week heading our way and you will not want to miss a moment of the action!

This week, Michael Cornithos (Chad Duell) and Sasha Gilmore (Sofia Mattsson) will decide to test the romantic waters and see where things can go between the two of them. Michael and Sasha will want to get to know each other better.

Michael hasn’t had much luck with the ladies but he will be willing to see if he will have better luck this time. Michael has never been the type to want a fling and wants to invest a bit more with Sasha. There is definitely a connection between the two and it will continue to grow. Do you GH fans think Michael and Sasha will make a good couple?

Meanwhile, Ava Jerome (Maura West) will abide her time as she waits for another chance to get Ryan Chamberlin (Jon Lindstrom) now that he has been taken alive for Jordan Ashford’s (Briana Henry) sake. Ava recently lured Ryan to the cabin and she knew exactly what she was doing. It appears she will get Ryan but not in a way that she had planned.

Scott Baldwin (Kin Shiner) will be there for Ava both emotionally and legally since she may be in a little trouble herself. Are you happy that Ava was able to get ahold of Ryan? Do you think she will end up finishing him off? 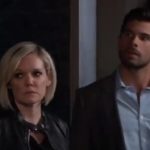 Also a reminder that GH will rebroadcast this year’s anniversary show, a tribute to the late Gail Baldwin on Monday due to it being a holiday. As you can see we have a very eventful week coming up, so make sure to stay tuned to ABC’s General Hospital to see how this all unfolds. Don’t forget to check often with Soap Opera Spy for all your latest spoilers, news, updates, and much more!

Days of Our Lives Spoilers: Week of May 27-31 – Xander Pokes Holes in ‘Nicole’ Scheme – Kristen Determined To Revive Brady Romance