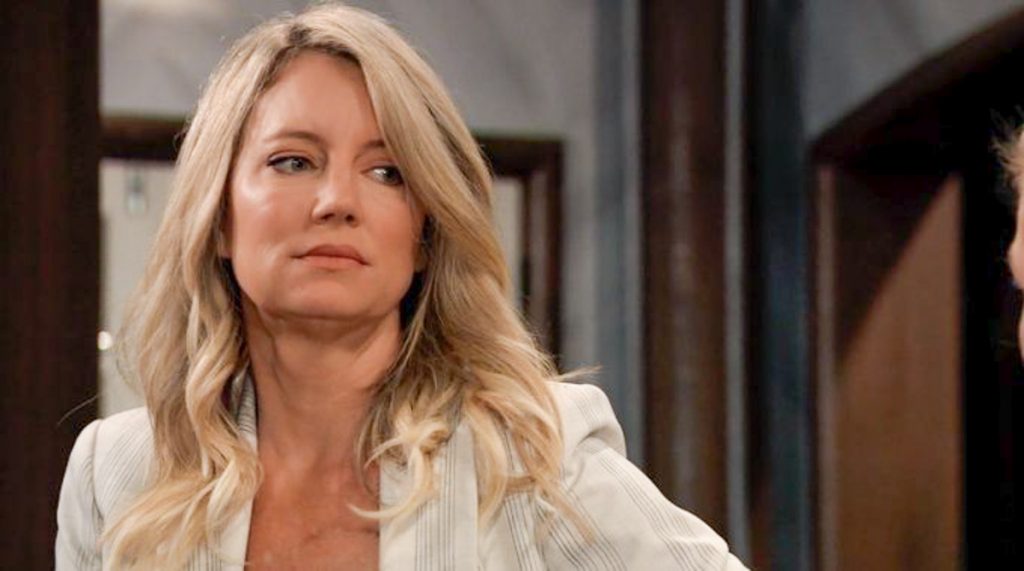 Welcome to your Friday, November 1st General Hospital (GH) recap! We begin our day at the Jerome art gallery where Ava Jerome (Maura West) has cornered the masked man and is holding him at gunpoint. The man removes the mask and its Nikolas Cassadine (Marcus Coloma) – Ava passes out in his arms.

At General Hospital (GH) Hayden Barnes (Rebecca Budig) and Jasper Jax (Ingo Rademacher) discuss if Dev found and sold the Helena portrait to Ava. Elizabeth Webber (Rebecca Herbst) stops by and says how glad she is Cam and Joss went to the Halloween dance.

At the Corinthos mansion, Sonny Corinthos (Maurice Bernard) and Carly Corinthos (Laura Wright) thank Brad Cooper (Parry Shen) and Lucas Jones (Ryan Carnes) for taking Avery trick or treating. Brad tells a shocked Carly that he needs to be honest with her, he went to Nelle Benson’s (Chloe Lanier) parole hearing the week prior.

Carly is livid with Brad and he says he has compassion for Nelle that no one understands. Carly says she has no idea why he would show sympathy for someone who wants to destroy her family – she subtly threats that “the balls in your court, choose wisely.”

At the Metro Court Halloween party, the “schoolyard fight between Nian Reeves (Cynthia Watros) and everyone else continues. Nina tells Michael to stop defending Sasha and what if he found out his own child had been lied about? Michael fires back and asks why she thinks Sasha did not have help with this plan?

Willow Tait (Katelyn McMullen) screams at Nina to stop and reminds her that she is far from perfect. Michael again hints that Valentin had something to do with the paternity secret which upsets Sasha. Valentin pulls Nina away and manipulates her into thinking the whole thing is their fault.

Laura Spencer (Genie Francis) reiterates that Valentin’s time at the head of the Cassadines is going to end soon. Valentin Cassadine (James Patrick Stuart) fires back that if Spencer is a threat, he will handle him like a threat.

At the Jerome Gallery. Ava Jerome (Maura West) wakes up and starts screaming out for Nikolas, but he’s nowhere to be found. Laura shows up at the Gallery and Ava tells her that Nikolas was just there! Laura begins crying as she screams that there’s no way he’s alive, but Ava insists.

Jasper Jax (Ingo Rademacher) decides that Helena’s portrait may have ended up at Ava’s gallery. He calls Laura Spencer and she says she will stop by the gallery and look for the painting.

Carly (Laura Wright) gets a call about Joss and sends Sonny to the haunted Star to get a drunk Joss. Joss comes home to a furious Jax and Carly who want to know what the hell she was thinking.

Elizabeth brings Cam to the hospital and she and Hayden make fun of his drunk state. She asks him to explains why he drank and he brings up the Franco mess.

Lucas tells Brad that hes proud of him for telling Carly about visiting Nelle in prison. Brad gets a text and Lucas looks at it secretly, it’s a nude photo of another man.

Ava looks at the security footage and does not see any sign of Nikolas. Laura says she does not believe Ava and is afraid shes seeing things and drinking too much. She starts crying as they embrace on the floor.

Julian pays off the actor to come between Brad and Lucas and send the nude photo via text. Nina tells Sasha that she is never going to forgive her, but shes going to back off for now.

Laura calls Julian and they take Ava to be admitted to Shadybrooke hospital. At Jax’s house, Hayden arrives and he says there has been a complication. Suddenly Nikolas walks into the room………flash to preview