General Hospital Poll: Who Will Take Down Shiloh? Vote Now! 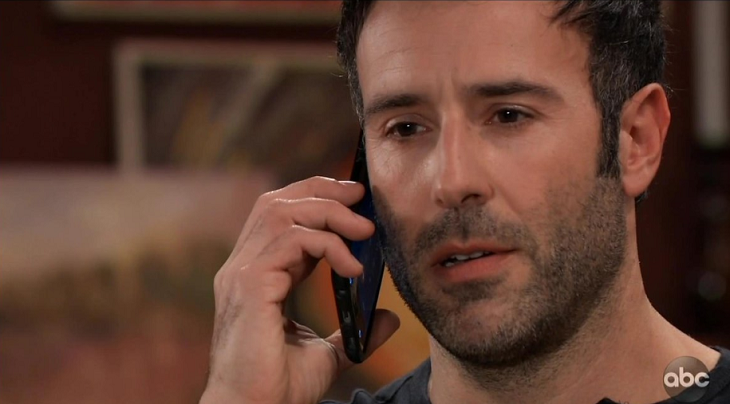 General Hospital spoilers tease that someone will ultimately take down Shiloh Archer (Coby Ryan McLaughlin), but who? Will it be one person, or perhaps many persons working together? We’d like to hear from General Hospital viewers who the most likely to take down sleazy Shiloh is!

Down the road General Hospital spoilers do say he’ll be caught in his own web, so keep that in mind? Here are a few likely suspects, or should that be heroes?!

Jason Morgan (Steve Burton): Jason has it in for Shiloh and Shiloh doesn’t like him too well either. He’s a good choice to take down Shiloh, and possibly permanently, since Sonny Corinthos (Maurice Benard) already told Jason to eliminate him!

Sonny Corinthos (Maurice Benard): Sonny is about fed up enough with Shiloh to take him down on his own.

Milo Giambetti (Drew Cheetwood): Even though mild mannered Milo doesn’t look like he’d harm a fly, he is one of Sonny’s bodyguards. He was sent in as a plant to get intel and protect Sam McCall (Kelly Monaco) as she tries to out-con the con that is Shiloh. He’s bulked up and GH viewers can imagine him choking the life out of the creep if he catches him trying to hurt Sam!

Julian Jerome (William DeVry); Once he realizes what a slimy worm Shiloh is, if Shiloh tries to prey on Kim Nero (Tamara Braun) in her grief, he might want to put out his lights!

Drew Cain (Billy Miller): Drew won’t put up with crap from Shiloh, and he’d be the first to call crap on Shiloh’s games! He too, might take him down if he hurts someone Drew cares about!

Michael Corinthos (Chad Duell): He’s killed before when it’s been necessary, and he might have to again!

General Hospital Spoilers – Vote In Our Poll Below

Detective Harrison Chase (Josh Swickard): Suicide by cop is too good for Shiloh, but if he caught Shiloh hurting Willow, he’d take him down in a heartbeat!

Sam McCall (Kelly Monaco): Sam herself wouldn’t hesitate to shoot to kill if need be to defend herself! She’s not exactly what you’d call helpless.

Kristina Corinthos-Davis: (Lexi Ainsworth): It would be pure poetic justice if Shiloh were taken down by a woman, and Kristina could get mad enough to do it once she realizes what he really is!

Willow Tait (Katelyn MacMullen): Sweet Willow may have a not-so-sweet side once she’s pushed beyond the brink, and she’s just about there!

Harmony Miller (Inga Cadranel): Willow’s mother was cast aside by Shiloh. He could replaced her with a younger model, and her daughter at that…’nuff said!

WILD CARD – Ryan Chamberlain (Jon Lindstrom): Say no more. If Shiloh is stupid enough to pull his esoteric nonsense on Ryan Chamberlain and gets on his bad side, or just plain gets in his way – GH viewers know how that story will end!

We’ve listed the Top Four candidates who could ultimately get the job done. We’ve also left a spot for write-in votes. Do you think one of these four will take Shiloh down or will it be one of the others? Let us know by voting in our poll below.