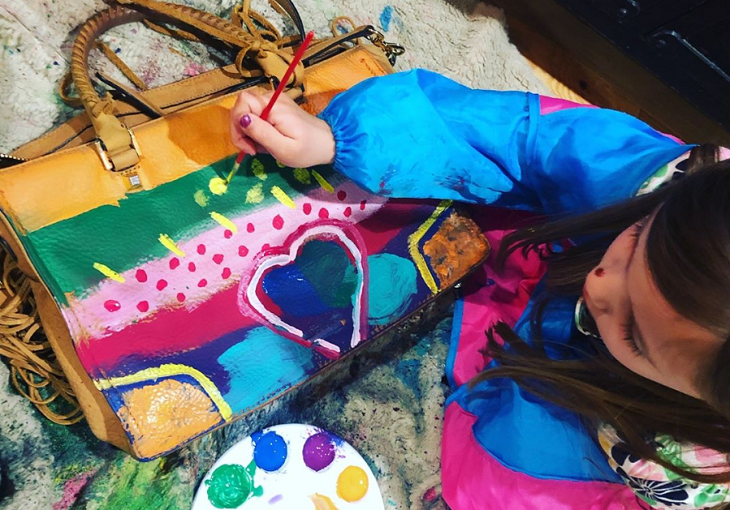 It looks like this General Hospital star might have a little designer in the making at home! Actress Kirsten Storms recently shared a photo of her adorable daughter Harper putting her own touch on one of Kirsten’s designer bags. And while that might sound horrifying for a lot of fashionistas out there, Kirsten insists that everything was in control.

The actress, who plays Maxie in Port Charles, shared a sweet photo of Harper painting and drawing on one of her Rebecca Minkoff purses. Kirsten loved the final result so much that she posted it on social media, much to the delight of her fans. Kirsten wrote in the caption, “One of my @rebeccaminkoff bags got dye all over it (it was basically dead to me) , so I asked my kiddo to hook it up. My new favorite purse.”

It didn’t take very long for Kirsten’s social media followers to respond with comments such as, “It is so funny what kids can do to make you feel so much better I hope that made you smile,” along with, “Oh how special! What an artist! Its beautiful Harper!!”

One of my @rebeccaminkoff bags got dye all over it (it was basically dead to me) , so I asked my kiddo to hook it up. My new favorite purse 😍 #LimitedEditionByHarperRose #RebeccaMinkoff https://t.co/3Gx2iGdr75

Another fan wrote, “That is such a FANTABULOUS Idea. You have a design in the making.”

And while a lot of mothers would frown upon seeing their children turn their designer bags into their own personal canvas, it’s great to see that Kirsten has such a relaxed attitude about it. Plus, there’s always a possibility that little Harper might one day grow up to be a bag designer. The talent is definitely there. Fingers crossed!

General Hospital airs weekdays on the ABC network. Check your local listings for times. Let us know what you think in our comments section below. Also, come back to Soap Opera Spy for all the latest news, updates and spoilers on General Hospital and all of your favorite daytime television shows right here.

General Hospital Spoilers: Ryan Has A Shocking Surprise For Ava