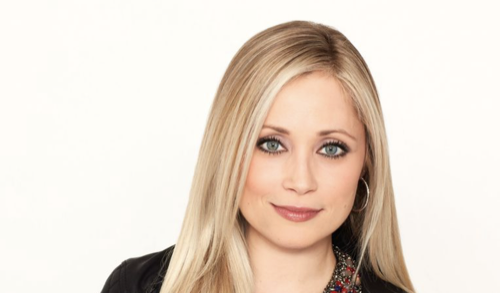 Emme Rylan has a new birth announcement, but it’s not something that you would expect. No, the General Hospital didn’t secretly give birth to a newborn bundle of joy. And no, she hasn’t been hiding any secret pregnancies from her fans, either. But she does have a new family member that she has just added to her clan. Here’s what she has to say!

The actress, who is best known for her role as Lulu on General Hospital, has just adopted a puppy! So not only does she have her hands full with her husband and her children, but now she’s got yet another pet to take care of in addition to the work she does on General Hospital. How in the world does this woman juggle it all?

Emme shared two photos of her new, lovable Pomsky puppy on her Instagram account and yes, he is just too cute for words! She captioned one of the photos with, “From now on this is the only kind of birth announcement we ever plan on making! Today our pack grows by one more furry friend!! 2 adults, 2 kids, 1 toddler, 2 cats, 1 dog and 1 PUPPY!?!?!?! What could go wrong?!”

A lot of Emme’s fans congratulated her on the new addition to her family by commenting on her post with, “Amazing how crafty you are -impressive!! You’ve got this.” Along with, “Sounds and looks like a great family to be a part of…. Beautiful kids and can’t go wrong with the fur babies. Of course, I’m sure there will be some shenanigans and chaos.”

For now, it’s safe to say that Emme’s family is complete. She’s got all of the kids, furry babies, and love that she needs! In the meantime, don’t forget that General Hospital airs weekdays on the ABC network. Check your local listings for times. Also, come back to Soap Opera Spy for all the latest news, updates and spoilers on General Hospital and all of your favorite daytime television shows right here!