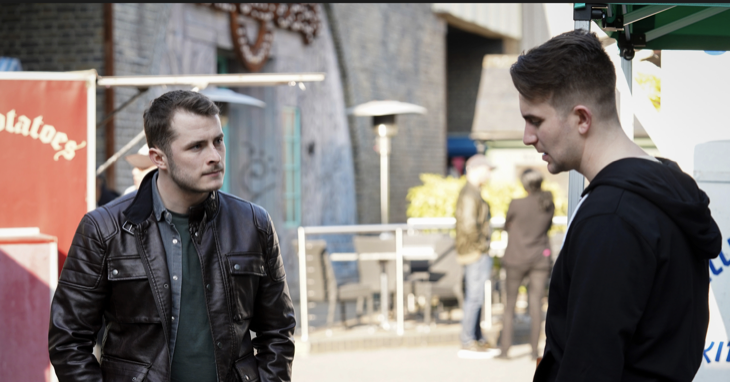 Tony Clay, known for his role as Callum Highway in EastEnders, drops hints as to whether his character and Ben Mitchell (Max Bowden) will ever come together. With the previous episode showing the two hooking up for the first time, what’s going to happen next to the pair?

Viewers may recall that previous episodes teased romantic chemistry between Ben and Callum during a confrontation between the two characters over a stolen vehicle. When Callum asked for a refund from Ben, their confrontation turned physical, which had a sensual vibe. That’s when Ben told Callum that he knows he likes blokes and so does he.

In an interview, Clay revealed that “there will be a bit of a fallout.” He explained, “There’s been a moment of ecstasy in what you’ve seen between Callum and Ben, but after that, there’s a massive feeling of guilt and almost shame towards what Callum has done to Whitney. He thinks: ‘Yes this was wonderful and felt so great, but oh my God, what have I done?’ He’s got one of the best people he’s ever met in his life – an amazing, beautiful human being – and he’s just cheated on her. That’s a huge moment for the character and for his emotional state. I think you’ll start to see that unravel in the upcoming episodes.”

Spoilers for next week’s episode showed that Callum will propose to his girlfriend Whitney Dean (Shona McGarty). When asked if it was guilt that forced his character to propose, he said, “Callum thinks this is what you do – you propose, you settle down, you get a house, you have kids and you live happily ever after. It’s the dream that he’s sold to himself, but is he being true to who he really is? We’ll have to wait and see.”

When someone tells you there's no #EastEnders tonight.

We'll have to wait until Monday, 8pm, to find out what happened with #Ballum! pic.twitter.com/NfeDiIVNgK

Clay hopes that his alter-ego will reach a point where he decides he wants to be more honest with himself. He added that soaps tackle real-life issues and with his character’s current storyline, it is possible for some viewers to finally come to the realization that they should be true to who they are and to begin doing things that will make them feel happier about themselves. He added that he’ll be pleased if that happens to some of those who watch the show, and he’ll know that he’s done his job well.