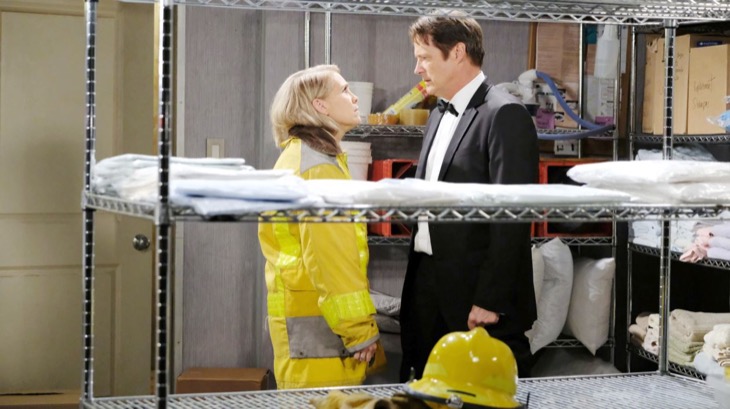 “Days of Our Lives” spoilers for the week of April 8-12 tease that some pre-wedding shockers are coming up. DOOL fans know Eve Donovan (Kassie DePaiva) just dropped a bomb at Jack Deveraux’s (Matthew Ashford) campaign rally. Since she couldn’t expose Tripp Dalton (Lucas Adams) and Haley Chen’s (Thia Megia) sham marriage, Eve had to improvise. She announced she intends to tie the knot with Jack, but Jennifer Horton (Melissa Reeves) just won’t accept that.

Jenn desperately wants to believe the real Jack’s still in there somewhere. She doesn’t recognize the man he’s become thanks to Eve, but she has hope that her true love will resurface. “Days” spoilers say Jennifer will try to talk Jack out of marrying Eve. She’ll insist it’s a terrible idea, but he’ll refuse to bail on Eve’s plan.

Jack will think this will work out well for his campaign, so they’ll move forward with the ceremony. When a glum Jennifer gripes to Eric Brady (Greg Vaughan), he’ll offer to help her. Eric will think maybe they can stop the nuptials, but how? Jogging Jack’s memory may be the only strategy that can help at this point. Jack needs to remember who he really is and drop this terrible new persona.

“Days of Our Lives” spoilers say Jennifer will reflect on some memories of her own. She’ll recall how Jack stopped her from marrying the wrong person years ago and decided she should do the same for him. Jennifer will recreate what happened, which will mean taking a few risks. Jack wore a firefighter uniform and pretended the building was about to burn up, so Jenn will do something quite similar.

When Jack sees smoke coming from under the doorway, he’ll naturally panic. However, it won’t be long until Jennifer appears in her own firefighter uniform. Jack will open the door to find her standing there, so he’ll be even more confused than before. “Days of Our Lives” spoilers state that Jennifer will eventually explain what she’s up to. She’ll tell the story and wonder if this is ringing any bells for Jack.

Previously on #DAYS, Tripp and Haley struggle to maintain their cover story.https://t.co/ZsCmioRrzb pic.twitter.com/3hLCMflZEE

DOOL viewers can expect Jack to have a memory flash, but it won’t be enough. Jack will insist on marrying Eve the following week, so Jennifer will be out of luck for now. It sounds like she’ll just have to be patient and keep hope alive for a real reunion!

Are you excited about all the Jack and Jenn drama? We’ll give you updates as other “Days” news and rumors emerge. Stay tuned to DOOL and don’t forget to check Soap Opera Spy often for the latest “Days of Our Lives” spoilers, rumors, updates, and news.