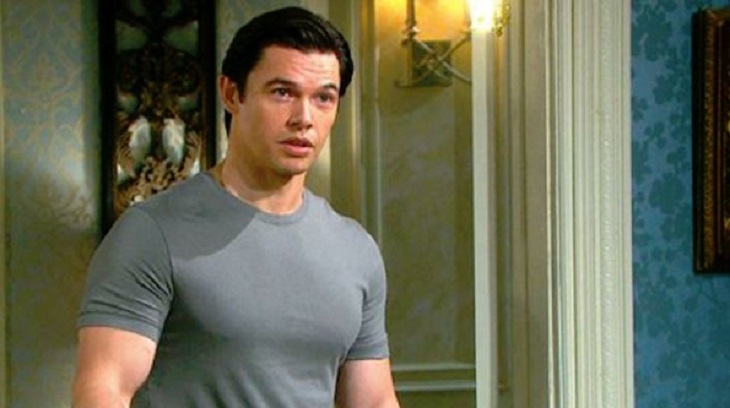 Days of Our Lives spoilers tease that Eve Donovan (Kassie DePaiva) is not going to be a happy camper when she finds out that Xander Cook Kiriakis (Paul Telfer) has stolen Dr. Rolf’s (William Utay) journal with notes in it for the amnesia formula that cured Will Horton’s (Chandler Massey) amnesia!

She was hoping to keep that herself, as leverage over someone if needed, or possibly destroy it to keep any chance of Jack Deveraux’s (Matthew Ashford) memories returning from happening! Instead, Eve has had the tables turned on her; Xander now has major leverage over her!

Days of Our Lives Spoilers – Xander Gets Leverage

Eve knows Xander well enough to know that he will use that leverage to control her if she tries to do anything that’s against Xander’s interests. There’s probably plenty that Eve would like to do that might be against his interests, and this will be a very frustrating issue for her. Eve will need to find some dirt on Xander that she can leverage him with, so at least it might be a halfway level playing field!

Xander’s a bad boy from years back, so there’s probably plenty of dirt Eve can dig up on him. The trouble is, he’s such a slimy little stinker he’s wiggled his way out of every criminal charge he’s ever gotten himself accused of!

He’s even conned a couple of cons; he conned Leo Stark (Greg Rikaart) into thinking he was intimate with him, and conned Sheila (Tionne Watkins) into thinking he was John Black, complete with no ID, and erased the evidence against him for shooting Dr. Marlena Evans (Deidre Hall) from the police computers!

Maybe Eve will try pulling a con on Xander to get the journal back; but is she enough of a con to outcon a con the magnitude of Xander? Time will tell! Keep watching Days of Our Lives and check Days of Our Lives spoilers frequently to see how Eve gets herself out of this dilemma!

Bold and the Beautiful News: Winsor Harmon Gets A New Job