Days of Our Lives Spoilers Week of March 11-15: Marlena Lingers Between Life and Death, Tony DiMera Has a Message – John Needs a Miracle

“Days of Our Lives” spoilers for the week of March 11-15 tease that some shockers will hit Salem. Diana Cooper (Judith Chapman) wants John Black (Drake Hogestyn) for herself, so she’s willing to play dirty to make it happen. Dr. Marlena Evans (Deidre Hall) will find herself a target thanks to Diana’s research and a rotten trick.

Diana knows Marlena is highly allergic to penicillin, so she intends to use that for her murder plot. “Days” spoilers say Diana will inject some cookies with a dose of the drug and hope Marlena eats enough to take her out. She’ll even attach a note that leads Marlena to believe these cookies are from Haley Chen (Thia Megia). Poor Marlena will never see Diana’s deadly threat coming!

Later, John will discover Marlena’s lifeless body and start to panic. He’ll get help right away, but she’ll be in pretty bad shape. John will instantly be taken back to the last time Marlena was hospitalized. He nearly lost his love, but she managed to pull through in the end. It’ll be tough for John to go through another horrifying ordeal, but he’ll try to stay strong for Marlena’s sake.

To come between John and Marlena, Diana carries out a deadly plan. Watch Days of our Lives, weekdays on NBC. #DAYS pic.twitter.com/mmKFF7dEH7

Diana will eventually reach out to John and offer comfort. She’ll expect him to reveal that Marlena is dead, but she’s in for a big surprise. “Days of Our Lives” spoilers say Marlena will simply fall into a coma. The situation will still be dire, but at least Marlena will be alive. That’ll have to be enough for John and he prays for a miracle.

Of course, Diana will be rooting for a grim fate. She’ll hate that her plan didn’t work like wanted, but she’ll hold out hope that Marlena will never awaken. As Marlena lingers between life and death, she’ll see a familiar face. DOOL’s weekly promo shows some fantasy scenes featuring Tony DiMera (Thaao Penghlis). Marlena will be taken aback when he appears to her in a white room.

Tony will inform Marlena that her soul has left her body, so there’s no going back. However, that just won’t do for “Doc.” She’ll insist that her family needs her and it’s not her time. “Days of Our Lives” spoilers say Marlena will fight to awaken, so John will get that miracle he’s begging for! 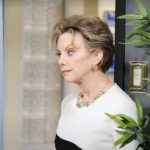 It sounds like some great episodes are coming up this week. We’ll give you updates as other “Days” news and rumors emerge. Stick with DOOL and don’t forget to check Soap Opera Spy often for the latest “Days of Our Lives” spoilers, rumors, updates and news.

Bold and the Beautiful Spoilers Week Of March 11-15: Sparks Fly Between Katie And Bill – A Shocking Return – Hope Distraught Over Steffy’s Exit

Young and the Restless Spoilers Week Of March 11-15: The Verdict Is In – Shocking Wedding Twist – Kerry’s Shady Scheme

Days of Our Lives Spoilers: Judi Evans Opens Up About Her Salem Exit – Missing…