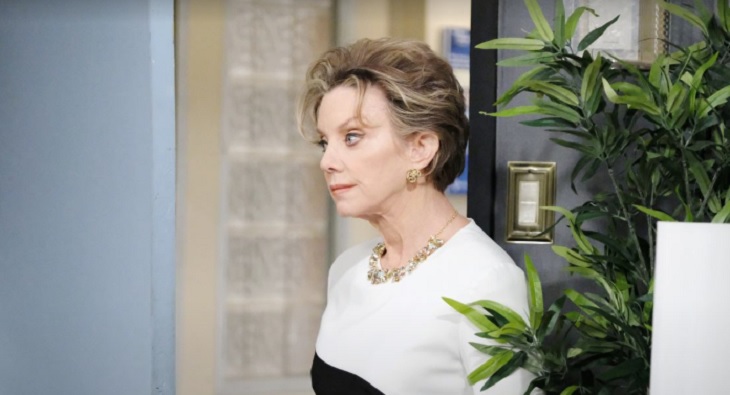 “Days of Our Lives” spoilers for Friday, March 8, tease that Diana Cooper (Judith Chapman) will form a deadly plan. She’ll realize the only way to get Dr. Marlena Evans (Deidre Hall) out of the picture is to take her out permanently. Diana will know this is awfully extreme, but she just won’t care. She’s determined to tear Marlena and John Black (Drake Hogestyn) apart, so this is her best option.

John and Marlena’s bond is pretty much unbreakable if they’re both alive. That’s why “Days of Our Lives” spoilers say Diana will settle on a lethal strategy. It looks like she’ll believe poison is the easiest path to getting rid of Marlena. It won’t leave a messy trail for anyone to uncover, so she’ll think she can play dumb and comfort John.

Diana will decide on all the details in preparation for her shocking move, but her plan will inevitably hit a few snags. In the meantime, DOOL spoilers say John will do some snooping. It seems Will Horton (Chandler Massey) and Sonny Kiriakis (Freddie Smith) will fill John in on the safe in Diana’s room. They’ll have a feeling some serious ammunition is inside, so John will take action.

“Days of Our Lives” spoilers state that John will sneak in Diana’s room and get cracking! He’ll hope to open this safe up and score some Leo Starke (Greg Rikaart) evidence. Next, Claire Brady (Olivia Rose Keegan) will make Haley Chen’s (Thia Megia) situation even worse. She just called Eve Donovan (Kassie DePaiva), so they’ll meet up on Friday and discuss Haley’s current location.

Days Of Our Lives Rumors: Could Leo Be Ted’s Son?

Claire may feel a hint guilty about ratting Haley out, but she can’t risk letting her rival steal Tripp Dalton’s (Lucas Adams) heart. At least that’s how Claire will look at it! As for Eve, she’ll gain another advantage for Jack Deveraux’s (Matthew Ashford) mayoral campaign. Eve will feel confident Claire’s tip can help Jack get the position they’re both hoping for.

Other “Days” spoilers say Jennifer Horton (Melissa Reeves) will lash out at Jack again. She just can’t understand how Jack could sink so low. Jack may not have his memories, but he’s capable of making his own choices. Unfortunately, his latest ones will only earn him outbursts from Jennifer and JJ Deveraux (Casey Moss).

Days of Our Lives Spoilers: Claire And Eve Team Up Against Haley – Deportation Plot Heats Up#DAYS#DOOL#DaysOfOurLiveshttps://t.co/OSZbwrmbDP

It sounds like some exciting scenes are coming up. We’ll give you updates as other “Days” news and rumors emerge. Stick with DOOL and don’t forget to check Soap Opera Spy often for the latest “Days of Our Lives” spoilers, rumors, updates and news.

EastEnders News: Kate Oates Opens Up About Bringing Back Past Characters