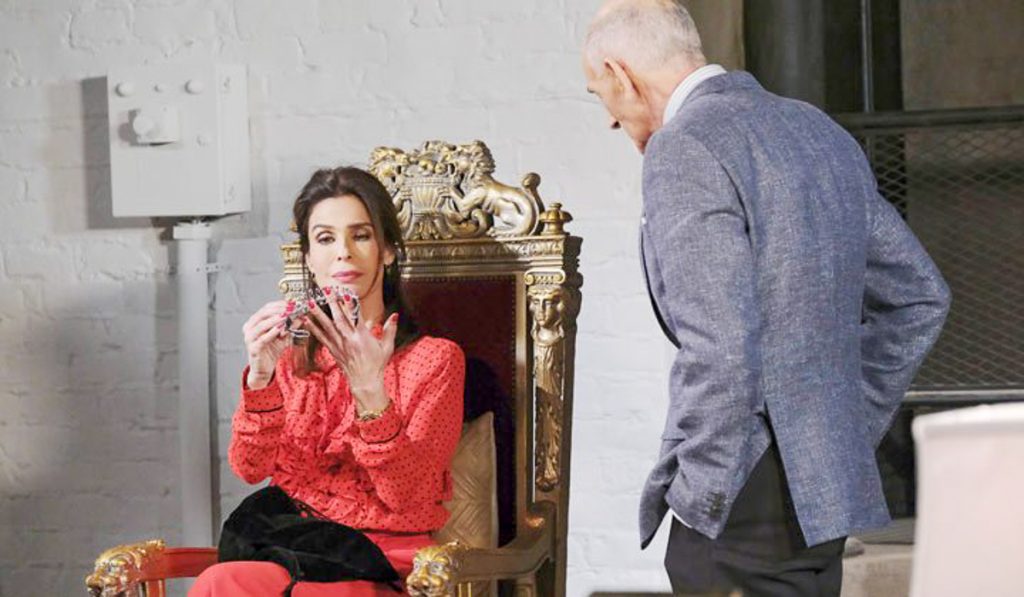 Days of Our Lives Spoilers – A Double Wedding Takes Place

A double wedding is set up to take place in the Horton Town Square on Tuesday, with Jack Deveraux (Matthew Ashford) and Jennifer Horton (Melissa Reeves) as one couple set to get married, and Justin Kiriakis (Wally Kurth) and Adrienne Kiriakis (Judi Evans) as the other. However, spoilers say that tragedy will upend one couple’s happiness before the week is over and someone will die during the one year time jump. Days of Our Lives viewers already know something will happen to Jennifer; what about Adrienne?

Eve Donovan (Kassie DePaiva) will make a last ditch attempt to stir up trouble for Jack and Jennifer before their wedding has a chance to take place. Days of Our Lives viewers can expect desperate Eve to try almost anything and everything to stop the wedding! As far as Eve Donovan is concerned, if she can’t have Jack, then nobody else should either!

Jennifer makes a shocking discovery; it looks like Dr. Wilhelm Rolf’s (William Utay) flash drive may have come back from the Salem Spectator IT department and now Jennifer knows what’s on it; might it be something that tells her that Rolf has turned her cousin Hope Brady (Kristian Alfonso) into Princess Gina? Or, could it be something even more dastardly and dangerous than mind control of her poor cousin?

Meanwhile, Dr. Rolf shares some important information with Princess Gina; he will likely tell her that Jennifer has his flash drive, and that he needs it back! Important secrets and new projects he’s working on may be on that flash drive and he doesn’t want it lost like his formulas for serums were! But then, Rolf is highly obsessed and secretive with his work, even if it were plans for how to build a deck he’d be in a panic if it were missing and wouldn’t want anyone to know his plans!

Ordered by Dr. Rolf to retrieve his flash drive, Princess Gina takes drastic measures to protect his secrets! The Days of Our Lives weekly promo video shows Jennifer hurtling off a balcony onto the ground in front of Jack, Jennifer, and their son JJ Deveraux (Casey Moss) and his girlfriend Haley Chen (Thia Megia)! Jennifer will fight for her life but will slip into a coma by week’s end. Photo stills show that she may have broken her neck, as well, although that does remain to be seen. It appears that Princess Gina and Jennifer will struggle over the flash drive and Gina will win over Jennifer! The big question is, will Jennifer survive?