Days of Our Lives Spoilers – Jack Deveraux And Dr. Henry Shah Have A Showdown

While Jennifer Horton (Melissa Reeves) watches in horror, Jack Deveraux (Matthew Ashford) and Jennifer’s captor, the Jennifer-obsessed Dr. Henry Shah (Piter Marek) have a showdown over her, and the two get into a struggle over the knife that Jack arrived to see Shah holding up to Jennifer’s throat! These should be some exciting scenes for Jack and Jennifer fans! 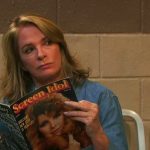 Days Of Our Lives Spoilers: It’s time for Hattie Adams to return to Salem – For Good!

Elsewhere, at the abortion clinic where Sarah Horton (Linsey Godfrey) plans to terminate her pregnancy, Dr. Wilhelm Rolf (William Utay) has shocking news for Kristen DiMera (Stacy Haiduk) who plans to have Sarah’s embryo implanted into herself; Rolf tells her he cannot perform the implant!

Kristen will be livid and demand answers, and she will get the shock of her life, although a pleasant shock, when Rolf informs her that the reason he cannot implant Sarah’s embryo into Kristen is because she’s already pregnant! Therefore, the implant is not necessary, and Kristen’s baby really is Brady Black’s (Eric Martsolf)!

It will be a poignant scene among family members and friends when Eli Grant (Lamon Archey) and Lani Price (Sal Stowers) find out that Lucas Horton (Bryan Datillo) is planning on taking his mother, Kate Roberts DiMera (Lauren Koslow) off of life support so that his cousin, and Eli’s grandmother, Julie Williams (Susan Seaforth Hayes) can have her heart!

Lucas was told there was no hope for Kate to live without life support, and he told Dr. Kayla Johnson (Mary Beth Evans) that he knew his mother would not want to live like that, and had her perform donor match tests between Kate and Julie. It looks like Kate’s a match, and Julie has no other way of receiving a life-saving heart transplant unless someone offers her a heart!

Lucas and his son Will Horton (Chandler Massey) say a tearful farewell to Kate as she is being prepared to be taken off life support. Although Kate’s heart was not affected, other internal organs were damaged badly by the bullet that Vivian Alamain (Robin Strasser) delivered at close range, and she had nearly bled out by the time she got to Salem University Hospital, also having been buried alive!

Surgeons would have had to clean out massive amounts of grave dirt from the wound as well, and yet she was conscious and able to speak, though barely, until as Days of Our Lives viewers will recall, Vivian came back to finish the job disguised as a surgeon and cut off Kate’s oxygen, which is what caused her to go into a coma.