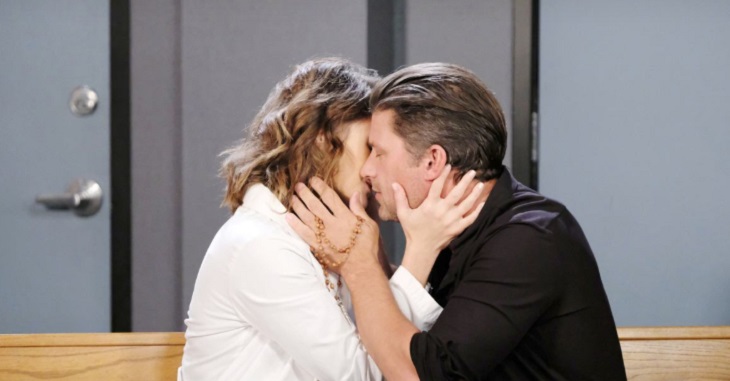 “Days of Our Lives” spoilers for Thursday, March 14, tease that Sarah Horton (Linsey Godfrey) won’t be able to resist temptation. The trouble will start when she offers comfort to Eric Brady (Greg Vaughan) at the hospital. They’ll bond over Dr. Marlena Evans’ (Deidre Hall) ordeal in the chapel, so expect things to escalate into a steamy moment.

Sarah will plant a kiss on Eric, and it looks like he won’t fight it – at least not initially. Too bad Brady Black (Eric Martsolf) will be lurking nearby! He’ll catch Sarah and Eric in the middle of this “Days” lip lock, so he’s bound to hit the roof.

Brady recently told Rex Brady (Kyle Lowder) to watch out for Eric. He suggested Eric often steals his brothers’ women, so Brady will see the proof right in front of him.

While Brady prepares to unleash his wrath, John Black will be taken aback. A nurse will claim Kristen DiMera (Stacy Haiduk) targeted Marlena – just like she did with that poisoning plot all those years ago. Of course, this nurse will probably be Shelby, the woman who keeps doing Diana Cooper’s (Judith Chapman) dirty work.

Diana overheard John’s story, so she’ll know Kristen is the perfect culprit. She’ll hope John buys Kristen’s guilt so she can avoid blame when she finishes Marlena off. However, there’s no need to worry! “Days of Our Lives” spoilers say Marlena’s going to be just fine. She’ll simply have to endure Diana’s tricks and fight her way back to John next week.

Days Of Our Lives Spoilers – Leo Hopes Stefan Will Hire Him

In the meantime, DOOL spoilers state that Leo Starke (Greg Rikaart) will contact Stefan DiMera (Tyler Christopher). Brady shot down the idea of bringing Leo back on board at Titan. As a result, Leo will head over to the DiMera mansion. He’ll hope Stefan has a place for his talents at DiMera Enterprises.

Leo is a pretty notorious schemer by now, so “Days” spoilers say Stefan may be wary – and he should be! Nothing good can come from trusting a guy like Leo. Stefan has also been known to plot horrible things, but he’s trying to be a better person for Chloe Lane (Nadia Bjorlin). Even if he connects with Leo on some level, Stefan will have to proceed with caution.

Bold And The Beautiful Spoilers Thursday, March 14: Taylor’s Devastating Call – Katie And Bill Are Set Up – Steffy Gets An Earful