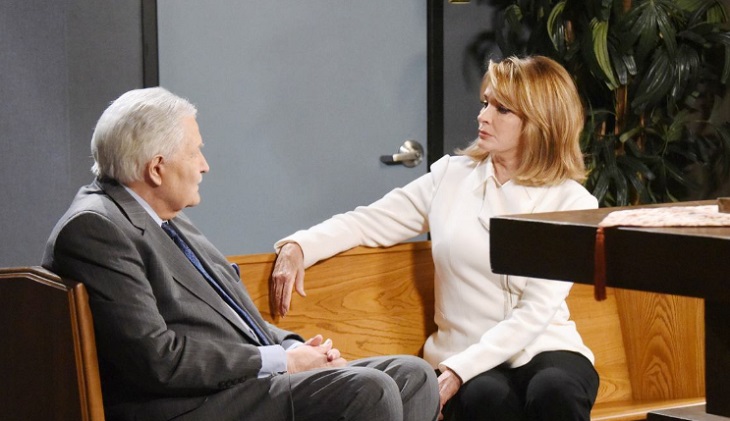 “Days of Our Lives” spoilers for Thursday, February 28, tease that Gabi Hernandez (Camila Banus) will prove she can be just as powerful as Stefan DiMera (Tyler Christopher). He may be CEO, but that doesn’t mean Gabi can’t go over his head. In fact, that’s exactly what she did and will reveal in Thursday’s episode. Gabi will announce that Gabi Chic has been reinstated, so she isn’t going anywhere.

Stefan will fume when he realizes Gabi went behind his back and convinced the board to keep her company. Gabi basically IS her brand, so they refused to let her firing stick. Since Gabi Chic has been profitable for DiMera Enterprises, that’s all that really matters. The board isn’t interested in letting Stefan blow a good thing over his vicious vendetta.

Once Gabi spells it all out and brags about her sneakiness, Stefan will explode. They’ll have a fierce face-off, but it won’t be long until Chloe Lane (Nadia Bjorlin) halts the conflict. Days of Our Lives spoilers say Chloe will do her best to play peacemaker. She’ll think this is getting ridiculous, so she’ll lecture them about their constant bickering and hope they settle down.

Days Of Our Lives – Victor Moves Ahead With Diana’s Plan

While Chloe deals with Gabi and Stefan, Victor Kiriakis (John Aniston) will move forward with Diana Cooper’s (Judith Chapman) plan. They just agreed to form an alliance, which could bring some big benefits. Diana is willing to handle the Leo Starke (Greg Rikaart) situation if Victor helps her win John Black (Drake Hogestyn) back.

Days Of Our Lives Spoilers: Rex Proposes To Sarah – Will There Be A Wedding?

Days spoilers state that Victor will carry out step one on Thursday. DOOL fans can expect Victor to shock Dr. Marlena Evans (Deidre Hall). He’ll fill her in on a bombshell, which may involve Leo’s paternity or at least a major hint about John’s huge secret.

Next week, Days of Our Lives spoilers say Marlena will call John out for his deception and push for the truth about Leo. She’ll be upset that John would just leave her in the dark like this.

Days Of Our Lives – When Will Diana’s Lie Be Exposed?

Diana should be pleased once John and Marlena hit a rough patch, but she shouldn’t celebrate her victory just yet. Since Diana is probably lying about Leo’s paternity, it’s only a matter of time until her lie is exposed.

As for Sonny Kiriakis (Freddie Smith), he should be glad Victor’s potentially found a way out of this mess. Sonny may be wary of the cost, but he’ll hope the payoff will be worth it in the end. We’ll give you updates as other “Days” news and rumors emerge.

Stick with DOOL and don’t forget to check Soap Opera Spy often for the latest “Days of Our Lives” spoilers, rumors, updates and news.

Bold and the Beautiful Spoilers Thursday, February 28: Bill Vows To Put His Family First – Sally And Wyatt Share Their News