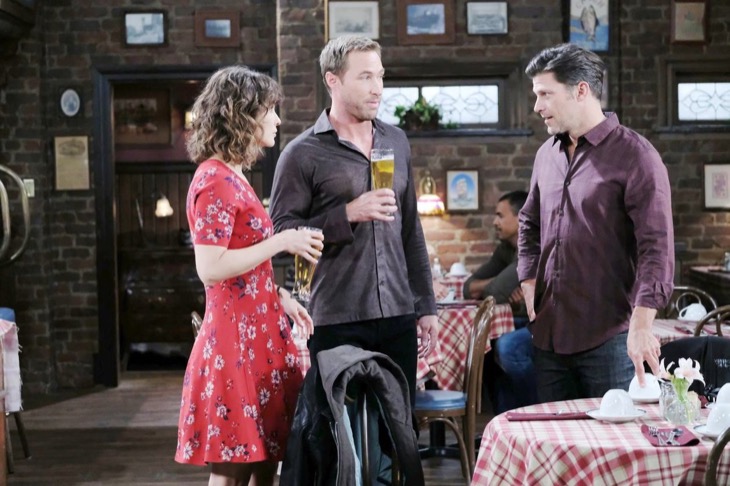 Days of Our Lives (DOOL) spoilers tease that Rex Brady (Kyle Lowder) will soon get a big surprise. He’s been in the doghouse with Sarah Horton (Linsey Godfrey) for two major indiscretions…sleeping with his ex Mimi Lockhart (Farah Fath) and getting her pregnant, and sleeping with Sarah’s sister Noelle Curtis. He really did the unthinkable.

But soon, Rex will get some payback. According to Days spoilers, he’ll find himself in Sarah’s room at the Kiriakis mansion, and he’ll run across some condoms left over from Xander Kiriakis (Paul Telfer) and Sarah’s hookup. Of course, Rex will have no idea that Sarah slept with Xander, but he will have someone in mind that he thinks Sarah might have been with…Eric Brady (Greg Vaughan).

This will lead to a confrontation between Rex and Sarah, and Sarah will explain that she had sex with Xander, not Eric. Rex will be stunned at Sarah’s actions, but because of his own indiscretions, he’ll be willing to overlook what she did. Rex really loves Sarah and he’ll be willing to move forward with their relationship if she is.

#Days #dool Sarah Reunites with Rex, But Eric and Xander Are Pining – See Who Wins Battle for Sarah’s Heart https://t.co/RZPIPYNTbS

Surprisingly, Sarah will agree to give Rex another chance. Over the past few weeks, she’s been developing feelings for Eric, but she’ll probably figure that Eric will have nothing to do with her since she slept with Xander. Of course, Rex doesn’t know anything about Sarah’s feelings for Eric, nor that Sarah came onto Eric before she slept with Xander.

And as far as Rex knows, Eric’s feelings for Sarah are strictly friendship-based. Eric would like to think so, too, but deep down he’s developed feelings for Sarah. He’ll be stunned to learn that Sarah and Rex have reconciled, and he just might find himself jealous.

Do you think that Eric has lost his chance with Sarah? Stay tuned to DOOL and don’t forget to check CDL often for the latest Days of Our Lives spoilers, updates, and news.