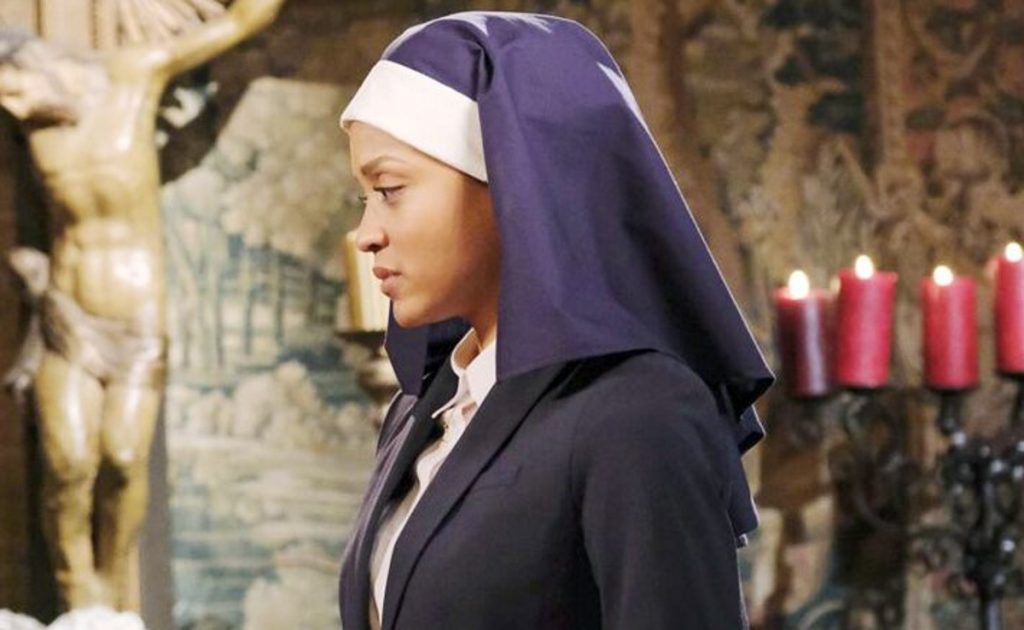 Days of Our Lives spoilers reveal what is happening with Lani Price. Actress Sal Stowers discussed her heartbroken character and being in a convent with Kristen DiMera (Stacy Haiduk). Also, learn what the soap star had to say about Gabi Hernandez DiMera (Camila Banus) and Eli Grant (Lamon Archey).

DOOL spoilers reveal that Lani is still heartbroken, even after an entire year after dumping Eli at the altar. Not only did Gabi force “Elani” apart, but the wicked widow is now sleeping with the man Lani was going to marry. The whole situation shattered her heart, driving her away from Salem and into a convent with Kristen Dimera.

The interesting twist in this storyline is that Kristen and Lani are in a convent dressed as nuns. As long-time viewers recall, Kristen’s sibling, Sister Mary Moira (also played by Stacy Haiduk) just happens to be a nun. We’re not sure if this is the same convent, but it wouldn’t surprise us if Sister Mary Moira makes an appearance soon.

“…if she can’t be with Eli, she feels that turning herself over to the Lord is the only place she can be forgiven.”

Days of Our Lives spoilers confirm that Gabi has never forgiven Lani for the death of Stefan DiMera (formerly Brandon Barash). However, does Lani really feel that church is the only place she can find forgiveness? She was just doing her job and Stefan jumped in front of the gun — literally. Everyone seems to understand this except for Gabi.

Days of Our Lives Spoilers: Lani Tells Kristen About Gabi – Will Villainess Get Revenge for New Friend? @celebratesoaps https://t.co/ZXX5ruwraY

It is only a matter of time before Eli realizes the truth about Gabi. Secrets are kept hidden only for so long in soaps. Once he does find out that Gabi nearly killed his grandmother just to get revenge, Gabi will be the one seeking forgiveness. After all, family means everything to Eli and something so evil will turn his heart right back to his true love — Lani Price.

The Bold and the Beautiful Spoilers: Ridge Hits The Breaks On His Marriage To Brooke – No Second Chances