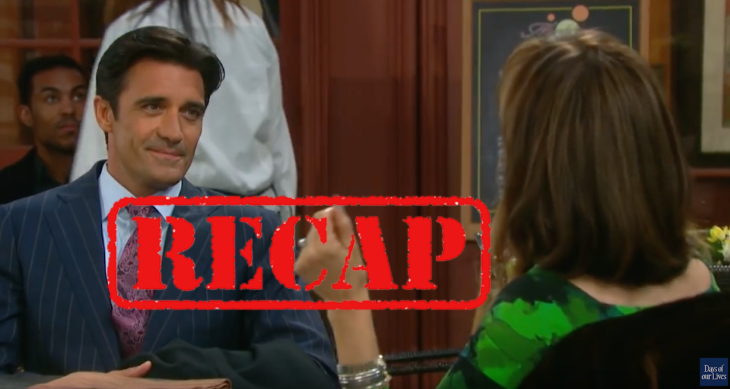 Days of Our Lives (DOOL) recap for Wednesday, January 23, 2019, reveals Tripp (Lucas Adams) got burned at work and had to go to the hospital. Kayla (Mary Beth Evans) takes Tripp into a room to look at his arm.

Kayla says Tripp will be fine and she and Tripp discuss Stefan’s (Tyler Christopher) release. Kayla leaves Haley (Thia Megia) to bandage Tripp’s arm. Haley gets Tripp bandaged and reminds him to change his bandage daily. Tripp says he remembers some of this stuff from the medical exam. Haley asks if Tripp is going to be a doctor, he tells her he made and mistake and had a change of plans.

Haley loved being a nurse but wanted to own a rabbit farm. Tripp tells Haley more about his childhood, and she tells him she thought her life was complicated. Tripp asks Haley on the way out if Steve (Stephen Nichols) will be home soon. Tripp tells Kayla he is curious to meet his uncle, Jack (Matthew Ashford). Kayla tells Tripp that might take a while. Tripp thinks Steve might be able to help Jack with that. Tripp assures Kayla that Steve loves her and will be home soon

Days Of Our Lives Spoilers Ted Wants A Second Chance

Days of Our Lives’ Kate (Lauren Koslow) is sitting waiting for service; Ted (Gilles Marini) joins her. Kate wants to know what Ted is doing there. Kate asks if the island changed Ted any. Ted tells Kate that Hope (Kristian Alfonso) helped him when he first got back to Salem. Hope tells Ted that is Hope’s job. Ted says Hope went above and beyond and the least he can do is be an upstanding citizen.

Ted says Hope is a beautiful and impressive woman, but he wants to start over with her. Kate accuses Ted of wanting to get close enough to kill her this time. Ted wants another chance with Kate. Kate tells Ted he will never get another chance. Kate says he spends months tangled up in lies and blackmail and has no interest in getting back with him. Ted asks for one last kiss he thinks their relationship deserve proper closure. Kate throws a drink in Ted’s face, and Hope sees it.

Days of Our Lives’ Eli (Lamon Archey) asks Hope about Rafe’s (Galen Gering) trip to Europe. Melinda (Laura Kai Chen) joins Hope and Eli, and she is furious that the evidence against Xander (Paul Telfer) is gone. Abe (James Reynolds) walks in and demands to know what is going on in there. Melinda tells Abe he needs to fire Hope. Eli defends Hope. Hope says they didn’t have enough evidence for a lot of these cases. Melinda blames Hope for losing the evidence but Abe says the buck stops with him, his office lost the evidence.

Abe explains to Melinda what happened to the footage and she blames him for giving his friends access to police footage. Melinda quits as D.A. Hope thanks Eli for having her back. Eli questions why Rafe went to Sami (Alison Sweeney). Hope explains that Johnny (ex-Aaron and Griffin Kunitz) is close to Rafe and Sami needed his help. Hope thought Sami was in their rear view mirror.

Eli tries to assure Hope that Rafe would never make that mistake again. Eli asks Hope if this has anything to do with Ted. Hope needs to get some air and walks out. Meanwhile, Melinda calls Jennifer (Melissa Reeves) and tells her she resign. Melinda says she has a scoop for Jennifer. Melinda gives Jennifer her story and tells her to run it. Eli is glad that Melinda resigned.

Days of Our Lives’ Kayla asks Haley how her appointment with Marlena (Deidre Hall) went. Haley tells Kayla that Marlena put her at ease and she opened up to her. Haley tells Kayla she knows she made a mistake and will never do that again. Haley tells Kayla how good J.J.(Casey Moss) has been to her. Haley arrives at J.J. and tells him she’s making dinner. J.J thanks Haley and asks if she has heard from Melinda. J.J. tells Haley he had a beer with his dad and thought they connected.

Melissa Reeves dishes on all the Jennifer drama with Paul Telfer and Greg Rikaart.

Listen in on @ApplePodcasts and Google Podcasts. pic.twitter.com/muxG0i1awH

Jack asks if J.J. hopes she becomes his girlfriend. J.J. tells Jack he and Haley are just friends. J.J. asks Jack how things went with him and Jennifer. Jack believes he has more in common with Eve (Kassie DePaiva). J.J. tells Jack that Eve is using him to get to Jennifer just like she used him. Jack asks if Eve tried to sleep with him too and J.J. looks at him. J.J. tells Jack about his relationship with Eve. Jack says it’s shocking to see he and his son have the same taste in women. J.J. moves to leave, but Jack stops him. Jack tells J.J. he is there for him anytime he needs him. J.J. is there if Jack wants to talk and gives him his address. J.J. tells Jack if he is planning to run for mayor, beating Abe won’t be easy.

Days Of Our Lives Eve And Jennifer Argue Over Jack

Days of Our Live’s Eve is trying to read Rolf’s (William Utay) formula. Eve thinks she should destroy the journal to make sure Jack doesn’t get his memory back. Jennifer shows up at Eve’s and demands to see Jack. Eve tells Jennifer that her plan was a bust. Eve claims this isn’t about Jennifer, she and Jack are two of a kind and belong together. Jennifer tells Eve her little plan isn’t going to work because Jack will never marry her. Eve shows Jennifer the bridal magazine and tells her Jack seems open to it.

Love is in the air! #DAYS pic.twitter.com/KKgZwLmpOM

Eve says she would have taken that job if she was afraid of losing Jack. Jennifer tells Eve she stayed there to rub the relationship in her face. Jennifer tells Eve Jack will realize what she is up to and she will be alone as always. Jack walks in and tells Eve she has some explaining to do. Jack brings up Eve sleeping with J.J. Eve tells Jack he slept with Jennifer’s mother. Jack tells Eve he’s going to run against Abe.