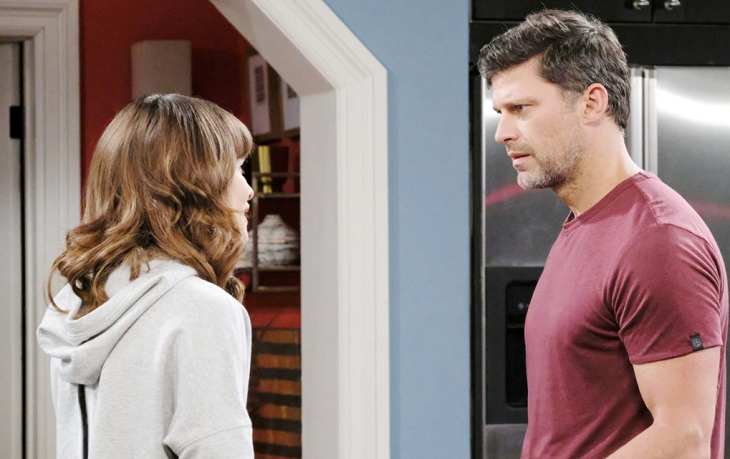 Ben offers Ciara coffee and sits with her. Ciara pulls Ben into a kiss. Ciara is afraid she will be a distraction to Ben. Ben and Ciara start to kiss again and are interrupted by another call. Hefinds out the cartel is headed back to Salem. Both Ben and Stefan Dimera (Brandon Barash) go to the park to warn Chloe Lane (Nadia Bjorlin) about the cartel.

Days of Our Lives’ Gabi Hernandez (Camila Banus) and Stefan trade insults as the passion grows between them. Gabi compares herself to Gabby, Abby Dimera’s (Kate Mansi) alter. Stefan wants to know what Gabi wants. Gabi says this is about what they need. He says he wouldn’t sleep with Gabi if she were the last woman on earth.

Stefan accuses Gabi of distracting him on purpose. Ciara comes into the living room and finds Gabi setting here. Gabi starts to put down Ben and annoys Ciara. She tells Ciara that Rafe is staying at her house with Jordan Ridgeway’s baby. Gabi calls Ben a psycho and Ciara gets defensive. Ciara starts to leave when someone breaks a window at the mansion. 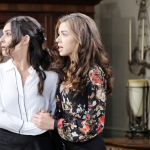 Days of Our Lives’ Chloe Lane (Nadia Bjorlin) and Holly Jonas (Harlow And Scarlett Mallory) are with Brady Black (Eric Martsolf) in the park and someone is watching them. John Black touches Brady on the shoulder, scaring both him and Chloe. John tells Chloe to call if she needs anything.

Chloe sees the text from Gabi on Brady’s phone and is furious with him. Brady starts to make excuses, and Chloe doesn’t want to hear them. Chloe tells him she knows why she broke up with him the first and second time now. Stefan and Ben arrive as Brady is packing up their stuff. Brady tells Stefan that Chloe is gone. Chloe goes to Doug’s place instead of the Dimera mansion. Someone has knocked out both of Chloe’s bodyguards outside.

Days of Our Lives’ Eric Brady (Greg Vaughan) and Sarah Horton (Linsey Godfrey) talk about how he fell in love with Nicole Walker (Arianne Zucker). Eric feels guilty over Nicole’s death. Sarah thinks Rex will want Eric to be his best man; Eric wants no part of it. Marlena Evans (Deidre Hall) shows up at Eric’s door and hopes she isn’t interrupting. Marlena wanted to talk to Eric before going to the hospital. She tells Eric not to make any more grand bargains.

Days Of Our Lives Spoilers – Sonny Kiriakis Worries About Will Horton

Sarah tells Marlena that Eric offered to shoot their wedding photos. Eric wants to speak to Marlena alone. Marlena encourages Eric to be honest with Sarah, but he refuses. Eric tells Marlena that Nicole is gone and would want him to be happy.

Eric tells Marlena he will never forgive her if she says anything to Sarah. Sarah demands to know why Eric won’t stand up for her and Rex Brady (Kyle Lowder). Eric believes it is better for him and Rex if he’s not in the wedding party. Sarah tells Eric she heard part of his argument with Marlena and asks what it was about because it wasn’t about Will.

Days of Our Lives’ John Black (Drake Hogestyn) has gotten a book for Will Horton (Chandler Massey). John suggests to Marlena that Will’s parents should know of his condition. Meanwhile, Will has a seizure caused by his tumor. Rex sedates Will and plans to move on with the biopsy after he comes out of the seizure. Sonny Kiriakis (Freddie Smith) promises to be there when Will wakes up.

Days of Our Lives #DOOL Spoilers: Marlena And Sonny Receive Shocking News About Will @celebratesoaps https://t.co/ZqNadiaZTX

Sonny kisses Will before he goes into surgery. He talks to Rex in the hallway but doesn’t get any specific answers. John joins Sonny while he waits for Will to come out of his biopsy. He tells John about Will’s seizure, and he supports Sonny. Will survives the biopsy and Rex brings him back to his hospital room. Will talks to Sonny about keeping this bandage as a headgear then falls asleep.