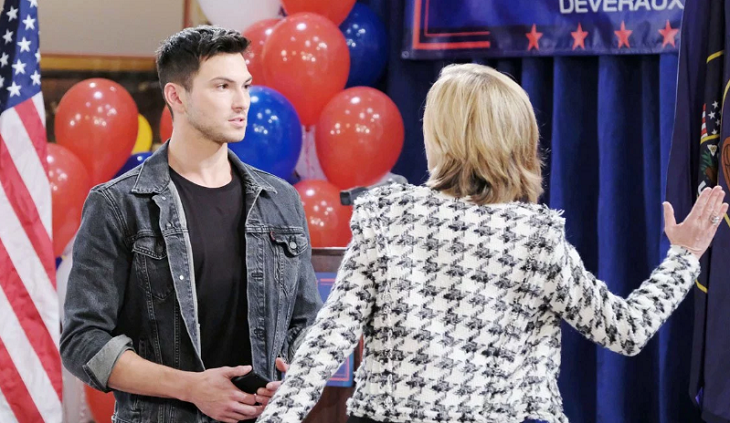 Ciara tells Ben she is worried about Claire Brady (Olivia Rose Keegan) who has done something stupid. Claire tries to force Eve Deveraux (Kassie DePaiva) to speak to Tripp Dalton (Lucas Adams) on her behalf and take the blame for Claire making the video.

Claire then goes to Tripp’s apartment and tries to get him to take her back. She tells Tripp that she made a mistake and wants to move back into the loft. Tripp tells Claire he hates her and she will never be back in his bed. Claire packs up Tripp’s close and begins to set fire to them in the floor, Ben come in and stops her.

Days of Our Lives J.J. Deveraux and Haley Dalton are on the run from ICE agents to keep Haley from being deported. Haley wants J.J. to be sure that he wants to do this. J.J. explains that Haley that they don’t have to run forever. Haley doesn’t want J.J. to leave his mom, J.J. says they will see each other, she visits his sister in Paris. 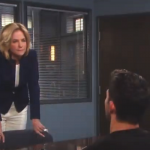 Eve is in the square when Ben almost bumps into her. Eve can’t believe Ben is walking the streets after murdering her daughter. Ben tries to explain that he was sick at the time and will always regret what happened. Eve tries to blame the fire on Ben as well; he tries to defend himself.

Eve attacks Ben in the square, and Jack Deveraux breaks them up. Eve wants to take Ben down; Jack promises that will happen. Jennifer Horton (Melissa Reeves) comes up to Jack and Eve and Jack asks about J.J.

Days Of Our Lives Spoilers – Jack Deveraux Is Sworn In

Jennifer tells Jack that he doesn’t care about J.J. at all, if he did, he wouldn’t have gone after Haley. Jack is sworn into office in the Horton Square. Jack promises they are going to cut down on crime and announces Eve as the new police commissioner.

Days of Our Lives Rafe Hernandez (Galen Gering) is approached by Jack who offers him the job as police commissioner. Rafe tells Jack he doesn’t want the job. He tells Ciara about the divorce. Rafe and Ciara promise always to be family. Ciara tells Rafe about her request for Ben to spend time with the baby. Rafe says Lani didn’t mention anything to him. Lani comes in as Rafe and Ciara are talking.

Days of Our Lives Hope Brady (Kristian Alfonso) speaks to Eli Grant (Lamon Archey) at the station and tells him she is about to be fired. Eli had questioned Tripp already and can’t find any leads on Haley, and J.J. Tripp calls J.J. and promises to get money to him so they can get out of town. Eli thinks he has a lead and shows it to Hope. Eli and Hope rush out of the station to grab Haley and J.J.

Young And The Restless Spoilers & Recap Tuesday, May 21: Adam Knows Who Shot Him – Lauren Plays Cupid For Jack