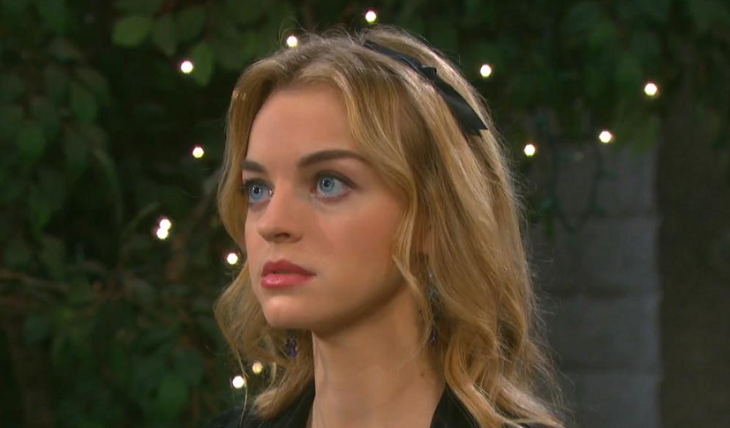 Days of Our Lives (DOOL) recap for Thursday, may 9, 2019, reveals Tripp Dalton (Lucas Adams) stares at the torn wedding picture and shoves it in his pocket when Haley Dalton (Thia Megia) comes into the room.

Haley heads to work as Tripp has an errand to run. Tripp stops by to bring Maggie Kiriakis (Suzanne Rogers) donuts. Claire wants Tripp to sleep with her again; he wants her to explain his torn wedding photo. Sheadmits to ripping up the photo and Tripp suggests she talk to Marlena about her problems.

Tripp tells Claire he needs to let her go because he can’t tell her when this will be over. Tripp can’t ask Claire to wait on him when he has no idea when they can be together. He asks Claire to think about it when she refuses. Tripp says he has to go to work. Tripp tells Claire to take care of herself and leaves. Claire swears not to lose Tripp to a little bitch like Haley.

Days of Our Lives’ Claire Brady (Olivia Rose Keegan) is playing in the fireplace when Sonny Kiriakis (Freddie Smith) and Will Horton (Chandler Massey) walk into the room. Claire accuses Sonny and Will of spying on her. Sonny asks why they would be spying on her. Claire blames her reaction on being concerned about Holly’s death. Will wants to stop and light a candle at the church before going to the hospital. Will and Sonny arrive at the hospital, Haley gives them papers to fill out before the scan.

Kayla asks Haley how married life is going, Haley is grateful for Tripp and won’t forget he wants to be with Claire. Kayla Johnson (Mary Beth Evans) gives Will his test results; the tumor is the same size as it was before the treatment. Kayla promises to look at the biopsy report again Will tells Kayla this tumor makes him act weird and he doesn’t like it. Kayla finds something she has missed in Will’s report. Meanwhile, Will forgets that Holly Jonas (Harlow and Scarlett Mallory) was killed.

Abe tells Eli he didn’t hit on Sheila Watkins (Tionne “T-Boz” Watkins), they kissed once and that was it. He tells Eli that Sheila left town, Abe says she was forced into because those pictures were made public. Abe shows Lani and Eli his sneakers that Sheila bought him. Eli doesn’t want Eve and Jack running this town. David cries, and Lani immediately soothes him. Eli tells Lani he loves and misses her and comments on how good she is with the baby. Lani asks Eli to take turns watching David as they vote.

Days of Our Lives’ Eve Deveraux (Kassie DePaiva) berates J.J. Deveraux (Casey Moss) for bringing up the rape to the press. Eve tells J.J. is was sick and twisted to bring the rape up, J.J. counters that trying to ruin Haley’s life is the sick and twisted part. J.J. tells Eve that she and Jack are a match made in hell. A reporter stops Abe in the square and takes questions about Valerie. Jack Deveraux questions him as well. Abe leave, and the reporter begins to question Jack then Jennifer Horton (Melissa Reeves) approaches.

Days of Our Lives’ Jack wants Kayla to sign a statement forgiving him for the rape. Kayla rips on the statement and throws it in Jack’s face and walks off. J.J. walks up, and Jack says he may have brought his old man down and asks if he’s happy. J.J. tells Jack he is one cold son of a bitch. Eve arrives home to find Jack and wonders why he isn’t out kissing babies. He tells Eve he tried, but people don’t want to shake his hand, he may have lost because of his past.

Eve wants something that will hit the press this morning, Claire sticks her nose in the door and says she can give her that. She plays a recording of Tripp’s confession for Eve but has demands of her own. Claire refuses to help Eve until she tells her what she has in mind. Eve tells Claire her plan and pushes until Claire sends the recording to her. Claire leaves, and Tripp runs into her in the park. Claire tells Tripp she can be patient.

Days of Our Lives Haley is in a room getting ready for a new patient. J.J. speaks to Haley and tells her he voted against Jack. J.J. and Haley sit down to talk about what they would be doing if she wasn’t married. He wonders if Haley has ever been to Smith Island. J.J. asks if Haley knows how to kayak.

Days Of Our Lives Spoilers: Tripp Encourages Off The Rails Claire To Seek Counseling https://t.co/YNugbS0Y0f pic.twitter.com/seDkLktd0x

J.J. talks about taking a picnic lunch to the island and hike to the other side. Haley and J.J. talk about what they could do on the island. Eve comes in and almost catches Haley and J.J. kissing. Eve keeps pushing Haley for information and then plays the recording that Claire gave her.

‘Bold And The Beautiful’ Spoilers & Recap Thursday, May 9: Wyatt Fills Liam In – Thomas Apologizes To Sally