Days Of Our Lives Spoilers: Jennifer Tears Into Jack For What He Did To Abe 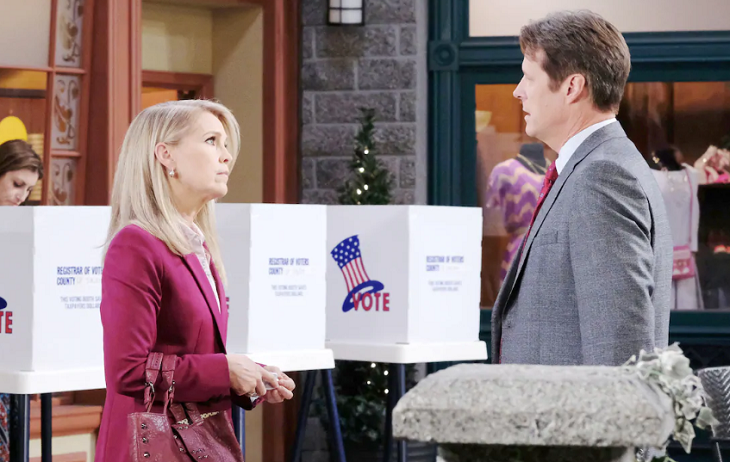 Days of Our Lives spoilers tease that Jennifer Horton (Melissa Reeves) will return from her trip and run into Jack Deveraux (Matthew Ashford). She will tear into him over the dirty political tricks  he used against Abe Carver (James Reynolds).

Jennifer knows that this is not the Jack she remembered and fell in love with, and she will let him know it in no uncertain terms.

Abe has always been a good friend to the family, and Jennifer absolutely despises dirty politics. Jack has even driven their son JJ Deveraux (Casey Moss) away with his continued mudslinging and betrayals of trust, even of those he once loved and who love him. Jenn can’t even blame Eve Donovan (Kassie DePaiva) for this one – this was all Jack!

Days Of Our Lives Spoilers – A Glint Of Remorse In His Eyes?

If there is any bright side at all to his taking the picture of Shelia Watkins (Tionne Watkins) kissing Abe and then using it against him, it would be that Jack has regained his reporter’s instinct of capturing something that could be newsworthy right away.

That is part of the old Jack, although he would have been a little more discriminating then. He would have captured a scoop for a legitimate news story for the Salem Spectator. Not for a gossip rag that could be called “The Salem Intruder” if he were working for one of those.

Yet there is that glint of remorse that Days of Our Lives viewers could see in Jack’s eyes when JJ rejected him. There may also be a pain in his heart. This would also be something left of the old Jack that Jennifer loved and lost.

Days Of Our Lives Spoilers – Jack Deveraux Has Lost Himself

But Jennifer knows that Jack has lost himself as well. So she can’t entirely blame him for everything bad he has been doing lately. She can blame that on the influence of Eve.

Days Of Our Lives Spoilers: Stefan Caught As He Tries To Sneak Gabi Out Of The Mansion https://t.co/0Nl7jvatNS pic.twitter.com/nhwQqtFCX7

Jennifer knows the old Jack is hiding there somewhere inside his subconscious. With every part that emerges, even if not being used the way he used to, there is hope that the rest will come back eventually.