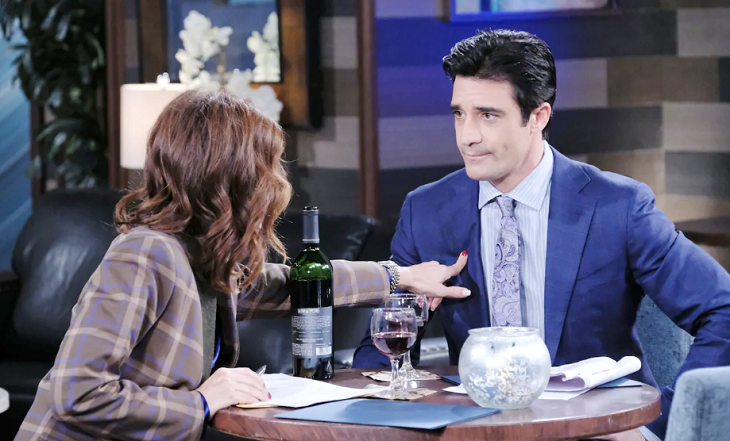 Days of Our Lives (DOOL) recap for Thursday, May 16, 2019, reveals Abe and Jennifer Horton (Melissa Reeves) discuss the election results. Jack Deveraux (Matthew Ashford) is announced as the winner of the mayoral election.

Abe Carver (James Reynolds) calls Jack to concede the race. He tells Jack he needs to put the people of Salem first. Abe talks to his wife; he wishes she was there with him. Kayla Johnson (Mary Beth Evans) arrives and offers to buy Abe a drink, Steve Johnson (Stephen Nichols) would insist.

Kayla pours Abe and herself a glass of whiskey. Abe toasts to good friends, Kayla adds to the best mayor Salem has ever known. He thanks Kayla for keeping him company. Abe wishes he could have stopped Haley’s deportation. Kayla says eventually Jack and Eve will face their day of reckoning. Jennifer comes upon Melinda in the park and finds her with a gun.

Days Of Our Lives Spoilers – Haley Chen Shocked And Furious

Days of Our Lives Melinda Trask (Laura Kai Chen) tells Haley Dalton (Thia Megia) that she is her mother. Melinda tells Haley how she hid her pregnancy, and her mother found out. She explains what a scandal her pregnancy would have been. Melinda says her father was ashamed of her. Haley asks Melinda what she did after her father refused to let her raise the baby. She says her mother refused to let their father throw her out.

Melinda’s mother announced that she was pregnant and left town with Melinda until the baby was born. Haley wants to know why Melinda never told her this. J.J. can’t believe the ICE agent isn’t going to call in this new information.

Haley accuses Melinda of being ashamed of her, Melinda claims to be proud of Haley, she disagrees. Agent Smith refuses to try to get a stay for Haley. Haley tells Melinda goodbye, and she is escorted out of the station, J.J. follows.

Days of Our Lives Hope Hernandez (Kristian Alfonso) and Ted Laurant (Gilles Marini) talk about her divorce. Ted invites Hope to dinner; she agrees to go with him. Hope and Ted run into Jack and Eve in the square, and Hope tells Jack what she thinks about him. Jack tells Hope she’s fired as soon as he takes over as mayor. Ted tries to defend Hope; Jack offers to let Hope resign first.

Eve wants to announce Hope’s firing at the swearing-in ceremony. Ted tells Jack he has to fire him too. Hope tells Ted he’s not quitting. Ted says if Hope goes, he goes. Jack and Eve head to the victory party. Hope doesn’t want Ted to quit because of her. Ted tells Hope it means nothing without her.

Hope and Ted share wine with dinner. Ted says Hope might still have her job if she hadn’t come to dinner with him. Hope says she and Rafe were great friends that fell in love. She and Rafe counted on each other, and now it’s come to this. Hope says she was never Rafe’s priority. Hope pulls out the divorce papers and signs them.

Days Of Our Lives Spoilers – Claire Brady Tries To Confess

Days of Our Lives Ciara Brady (Victoria Konefal) comforts Claire Brady (Olivia Rose Keegan) when she tells her Tripp Dalton (Lucas Adams) broke up with him. Claire doesn’t tell Ciara the whole story, Ciara questions why Tripp is blaming Claire. Ciara asks Claire if she did something to cause this. Claire tries to avoid answering Ciara. She says she couldn’t live a lie for three years and recorded Tripp saying the marriage was fake and gave it to Eve.

Claire says Haley came forward to protect Tripp after Eve threatened her. She tells Ciara that Tripp figured out she is the reason Haley is getting deported. Ciara tells Claire she’s really sorry this happened. Claire has thrown a bunch of Maggie Kiriakis’ (Suzanne Rogers) figurines and broken them. Ciara vows to help Claire fix them for her. Claire says there is something else she needs to tell Ciara. Ciara says this seems serious. Claire says recording Tripp wasn’t the first time she acted impulsively. Claire says she’s done terrible things. Ciara is happy they found a way to move on from the differences.

Days of Our Lives Haley is waiting to be taken to her van to the airport. Agent Smith goes to check on the van. J.J. apologizes and says this is all his fault. Haley says J.J. was the best thing that ever happened to her. J.J. and Haley kiss before she leaves. Tripp brings Haley’s bag and helps distract the agents while J.J. grabs Haley and runs off.

Bold And The Beautiful Spoilers & Recap Thursday, May 16: Bill Rejects Shauna – Katie Wants Her Family Back