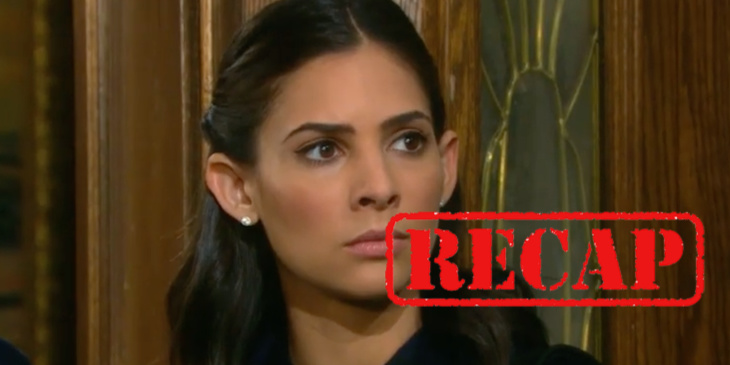 Days Of Our Lives (DOOL) recap for Thursday, January 17, 2019, reveals Abe (James Reynolds) goes out to speak to Sheila (Tione “T-Boz” Watkins) over a problem at the office. Abe got tickets for a concert for Valerie (ex-Vanessa Williams), but she cancels on him again.

Abe asks Sheila if she wants to go with him. Lani (Sal Stowers) and Eli (Lamon Archey) come in as Sheila asks if going on a date with him is even allowed. Lani and Eli inform Abe the shooting footage is missing. Abe says only John Black (Drake Hogestyn) had access other than his office and the police department. Sheila tells him, John Black, was there to look at the footage the other day. It turns out Xander (Paul Telfer) was impersonating John and Sheila didn’t check his id.

Abe questions if Sheila asked for John’s id, she says she’s not incompetent. Sheila asked for Id, but he claims to have left it at home. Sheila gave him access to the footage and asked what the big deal is. Eli shows Sheila a picture of Xander, and she identifies him as John Black. Abe jumps onto Sheila over losing the footage. Sheila tells Abe firing her would not look good to H.R. Abe can’t believe Sheila is threatening him. Abe gives in and gives Sheila the tickets. Sheila jokes about asking Xander “John Black” to go to the concert with her.

Days of Our Lives Spoielrs The Video Footage Is Missing

Days Of Our Lives’ Eli tells Xander that his life outside bars is over. Xander tells Eli we will see about that. Lani tries to pull up the footage from the square, but it got deleted. Lani and Eli go to Abe to show him their discovery. Hope (Kristian Alfonso) comes in and tells Xander she knows he deleted the footage. Hope tells Xander they have a witness that he impersonated John Black. Xander tells Hope this is going to make the cops and the mayor look very bad. Lani and Eli join them, and Hope tells Eli to turn Xander loose.

Days Of Our Lives’ Eric (Greg Vaughan) thanks Sarah (Linsey Godfrey) for calling the cops and getting him off Xander before he killed him, Eric says he could be in jail for murder if it weren’t for her. Eric wishes he could have saved Nicole (Arianne Zucker). Sarah tells Eric he made sure Xander is going away for a long time, and he is honoring Nicole’s memory. Sarah says there is one less bad guy on the streets to hurt someone. Sarah tells Eric the more she gets to know him the more she knows why Nicole loved him so much.

Sarah hugs Eric and tells him he’s a good man. Rex (Kyle Lowder) shows up and sees Eric and Sarah hugging. Rex wants to go out with them to celebrate, Sarah declines. Sarah says getting out is a good idea and tries to send Rex and Eric out alone. Rex tells Eric he needs to find a better way to help him. Rex wants Eric to plead his case with Sarah. Rex says Sarah and Eric have crazy chemistry. Rex wants Eric to use this to his advantage. Rex tells Eric to tell him if he is callous. Eric understands because Sarah is important to him. Sarah returns to the room and questions why they haven’t left.

Eric tells Sarah she is the reason there is something to celebrate and it would mean a lot if she goes with them. Eric, Sarah, and Rex arrive at the pub and Eric get them a round of beer. Rex wants Eric to leave, but he refuses to abandon Sarah. Rex and Eric play darts, he tries to push Eric out of the game. Rex tells Eric about a time Sarah hit a guy with a dart. Rex wants Eric to pretend to get a text and leave.

Days Of Our Lives Spoilers Stefan And Chad Clash Over Dimera

Days Of Our Lives’ Stefan (Tyler Christopher) tells Chad (Billy Flynn) he is going to take back everything that is his. Stefan says his first order of business is to take back his job at Dimera. Stefan has called a board meeting to challenge Chad as the head of the company. Stefan asks why Gabi (Camila Banus) is there, she tells him about Chad’s decision to end their association. Stefan says that will happen over his dead body. Chad goes to call the board to try and keep Stefan out. Stefan says to be a champion you have to see the whole board.

Days Of Our Lives’ Rafe (Galin Gering) walks in and catches Hope and Ted (Gilles Marini) shaking hands. Rafe asks what the hell is going on with them. Rafe tells Ted to keep his hands off Hope. Ted tells Rafe that someone else confessed and Stefan is free. Ted insinuates that Rafe jumped the gun on the arrest. Rafe assumes Ted hired someone to take the fall for Stefan.

Rafe tells Ted to leave so he can talk to his wife. Rafe tells Hope that Stefan was dead in the water until she sent Ted his way. Rafe says Stefan should still be in jail. Rafe tells Hope she is so blinded. Hope thinks Rafe is talking about Ted, Rafe tells Hope she is so obsessed with Ben Weston she doesn’t see anything. Hope says Stefan and Ben behind bars is her end game. Hope claims to want Stefan to pay for everything he has done. Rafe is upset that Hope didn’t mention Gabi and walked off. Rafe runs into Gabi who asks if he heard about Stefan. Gabi leaves, and Rafe gets a call from Sami (Alison Sweeney).

Young and the Restless Spoilers & Recap Thursday, January 17: Frightened Nikki Gets Her Gun and Shoots