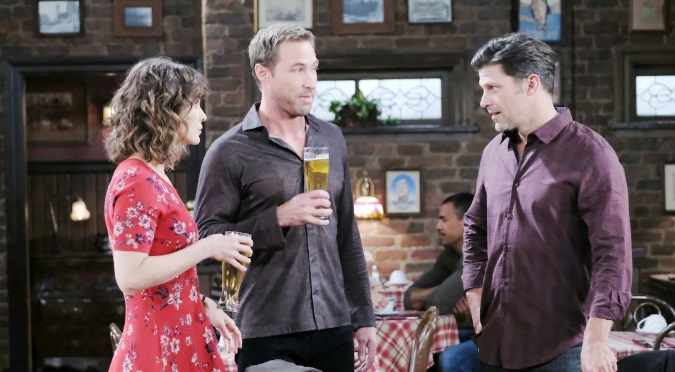 John will hate that the cops let this happen, but what’s done is done. Xander’s going to get away with shooting Dr. Marlena Evans (Deidre Hall) and there’s nothing they can do about it. “Days of Our Lives” spoilers say John will give Marlena the terrible news on Friday. He’ll wish he could’ve gotten justice for her, but Marlena will make peace with the situation.

Although Marlena won’t like that Xander’s free to hurt others, she’ll at least be happy she’s alive and well. Marlena is back with her family and has a long life ahead of her. She’s thrilled to be married to John, so she won’t let Xander have any more power here. Harboring too much anger would just bring additional suffering and that’s not something Marlena’s interested in.

Days of Our Lives Spoilers – Rex Drops Another Bomb

Other “Days” spoilers say Sarah Horton (Linsey Godfrey) will give Rex Brady (Kyle Lowder) a chance. After he makes another romantic pitch, Sarah will soften a bit and realize they could still have a shot together. However, Sarah will have one condition. She’ll demand complete honesty if they’re going to make this work.

Rex will be reluctant to offer that due to a secret he’s keeping. He hasn’t revealed the name of the second woman he slept with. Unfortunately, Rex will have no choice in Friday’s episode. Sarah won’t be willing to reunite unless Rex gives her some answers, so he’ll confess that it was Noelle Curtis. Since Noelle is Sarah’s sister, she’ll obviously blow her top!

“Days of Our Lives” spoilers say Sarah will dump Rex permanently, down a few drinks and land at Eric Brady’s (Greg Vaughan) apartment. She’ll start kissing Eric like crazy and hope he’s on board with a revenge sex session. Sarah will want to sleep with Rex’s brother as payback for the sister shocker.

Eric will seem into it at first, but he’ll probably pull back in the end. He prefers meaningful trips to the bedroom, so he may bow out. Xander, on the other hand, will be glad to help with Sarah’s current needs. Things will get hot and heavy between them when Sarah returns to the Kiriakis mansion, so stay tuned.

Days of Our Lives Spoilers – Rafe Makes An Announcement

Finally, Rafe Hernandez (Galen Gering) will announce that he’s going to see Sami Brady (Alison Sweeney). She needs urgent assistance, so Rafe will bail on Hope Hernandez (Kristian Alfonso) and all his work duties. When Sami calls, Rafe usually comes running! This could certainly add to Rafe and Hope’s growing list of issues.

Brandon Barash And Harper Rose Are Too Cute For Words In New Pic https://t.co/qsJmGQpD3X pic.twitter.com/BOLyHxqpEP

It sounds like some Salem chaos is on the way. We’ll give you updates as other “Days” details and rumors emerge. Stick with DOOL and don’t forget to check Soap Opera Spy often for the latest “Days of Our Lives” spoilers, rumors, updates and news.

Bold and the Beautiful Spoilers Friday, January 18: Thorne’s Jealousy Heats Up, Hope Lashes Out At Sally