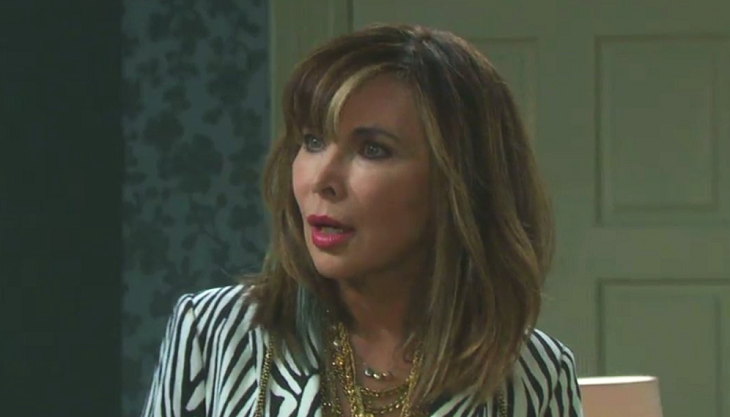 Days of Our Lives (DOOL) recap for Monday, May 20, 2019, reveals Will Horton (Chandler Massey) blames Marlena Evans (Deidre Hall) for his brain tumor.

Will says Marlena should have talked him out of it; she didn’t try hard enough to convince him not to do it. Sonny Kiriakis (Freddie Smith) tries to make peace between Marlena and Will. Will Can’t believe he blamed Marlena for the tumor.

Will has no recollection of his outburst at all. Sonny wants Will to go to the hospital and refuses to leave him. Marlena and John Black (Drake Hogestyn) realize they need the diary and he promises to find it.

Days Of Our Lives Spoilers – Kate Roberts Is Thrown Out

Days of Our Lives Maggie Kiriakis (Suzanne Rogers) accuses Kate Roberts (Lauren Koslow) of trying to take over Titan. Kate explains to Maggie that she was offering to keep an eye on Xander Cook (Paul Telfer). Maggie throws Kate out of the house and tells Victor Kiriakis (John Aniston) that this can’t happen again. Maggie tells Victor to stop acting like she’s stupid, Kate is after him. 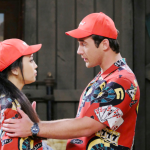 Victor doesn’t believe Kate is after him; Maggie wants him to promise to stay away from Kate. Victor can’t make Brady Black (Eric Martsolf) fire Xander because of Nicole Walker (Arianne Zucker). Victor needs Kate to watch over Xander. He thinks Nicole could take care of Xander without any trouble at all. Maggie starts to find her broken figurines and blames Kate for breaking them.

Kate tells Maggie she’s losing control. She says Will is back in the hospital and she doesn’t have time for this. Maggie cries and grabs a vodka bottle. Brady catches Maggie opening the vodka bottle and stops her. Maggie tells Brady that everything is broken.

Days Of Our Lives Spoilers – The Celebration Continues

Days of Our Lives Brady tells Eric Brady (Greg Vaughan) that he secured Nicole Walker’s (Arianne Zucker) divorce, Eric thanks him. Eric wants Brady to talk to Nicole for him. Brady says it’s not the right time. Brady thinks Eric should go to the funeral. Eric hopes Nicole can make it through the funeral without completely breaking. Brady believes Nicole will eventually forgive Eric.

Days of Our Lives Sarah Horton (Linsey Godfrey) meets Rex Brady (Kyle Lowder) at the hospital and tells him Xander is back in town and made a pass at her. Sonny calls Rex about bringing Will back in because of his memory lapse. Sarah promises to call Kate for Rex. Marlena wonders if Rex helped Dr. Rolf (William Utay) with the memory serum when he was living with him. Rex doesn’t remember but promised to try and find out. Sarah and Rex go back to Eric’s place and start to kiss when Eric walks into the room. Rex thanks Eric for punching Xander and protecting Sarah.

Days of Our Lives, Nicole and Xander continue to celebrate getting what they want. Xander kisses Nicole and tells her he wants it now. Nicole tells Xander she doesn’t even care about the little brat anyway. Nicole says asking miserable is hard. She loved tearing into Eric.

Days of Our Lives #DOOL Spoilers: Xander And Nicole Have Something To Celebrate @celebratesoaps https://t.co/4cbCuNJDp9

Xander says Eric is a wimp and doesn’t understand why Eric doesn’t tell her to go to hell. Nicole says Eric can have Sarah. She is surprised that Eric moved on so fast after her death. Nicole tells Xander he can go now tomorrow will be a harrowing day. She hopes Maggie will start drinking and give them some entertainment. Kate sees Xander leaving Nicole’s room.