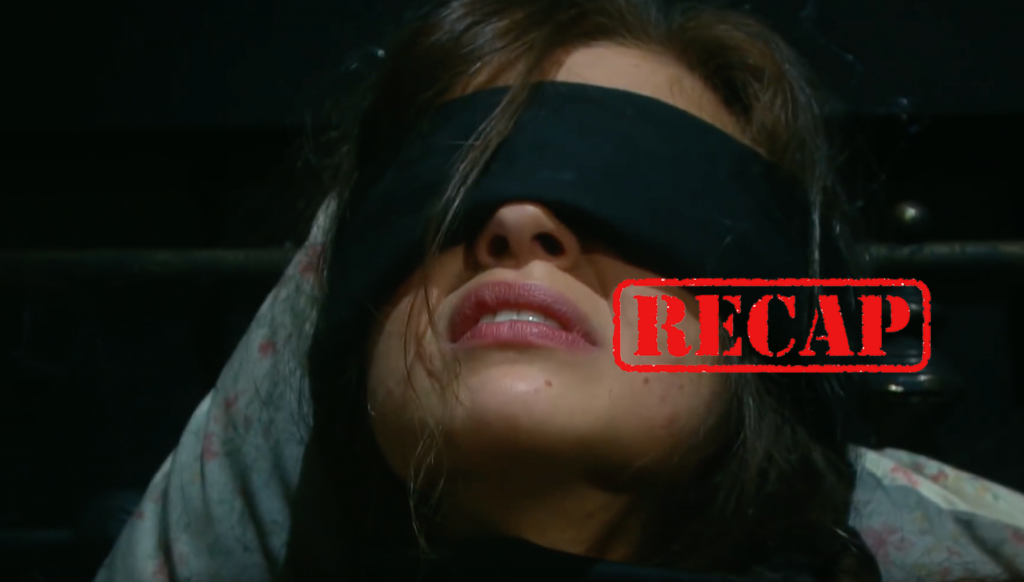 Days of Our Lives (DOOL recap for Monday, February 4, 2019, reveals  Chloe (Nadia Bjorlin) panics when she opens the envelope with the knife in it at Doug’s. Stefan (Tyler Christopher) takes her phone and starts to call the police when two gunmen come in and order him to put down the phone.

DOOL Spoilers Chloe And Stefan Are In Danger

One of the men tell Chloe she may have forgotten what happened in Mexico, but he didn’t and told her she would see the knife before it spills her blood. Stefan tries to calm the situation by bringing up Stefano (Joe Mascolo). Stefan tells the men that Chloe is his woman and his father will hunt them down to the ends of the earth with him right behind.

Stefan tells them they will wish their old boss had killed them if they make an enemy of him and his father. One man leaves the other says he will take his chances. Stefan uses a knife he found on a table to stab the guy in the back. Stefan starts to call the police, and the man shoots him.

Days Of Our Lives Spoilers Tripp And Claire Reunite

Days of Our Lives’ Claire (Olivia Rose Keegan) approaches Tripp (Lucas Adams) at work and wants to talk. Claire apologizes to Tripp for working with Ben (Robert Scott Wilson). Claire tells Tripp she was desperate to get what she wanted. Tripp blames her for losing Ciara (Victoria Konefal), but she says it’s not her fault. Tripp tells Claire she messed up and needs to own it. Claire tells Tripp that if she loses him, it’s her fault. Claire tells Tripp he turned to Ben because Tripp wouldn’t listen about Ciara.

Tripp claims to know that Ben set that fire and he wants him gone. Tripp asks if Claire doesn’t think Ben is dangerous, she recalls their conversation after Tripp left them. Tripp is furious at what Claire has done to him, but he did the same thing to Ciara. Tripp tells Claire that Ciara stopped trusting him. Tripp hates that Claire teamed up with Ben, but she had nothing to do with the breakup.

Claire thank Tripp for saying that. Claire asks Tripp if he’s going to give her a second chance, he says they are better off as friends. Claire tries to convince him they are more than friends. Tripp accepts her apology, and he wants to give them another shot. Tripp makes Claire promise there will be no more tricks or lies. Claire is grateful that Tripp forgave her and that they have a fresh start. Claire tells Tripp she’s written a new song and offers to let him hear it. Claire tells Tripp about Ciara’s return.

Days of Our Lives’ John (Drake Hogestyn) shows up at Diana’s (Judith Chapman) door, she calls him Roman (Josh Taylor) and welcomes him. John is stunned to see her. John is shocked that Diana is Leo’s (Greg Rikaart) mother. John tells Diana he never thought Diana Cooper was Diana Coleville. John tells Diana he isn’t Roman, she tells him she knows. Diana says it doesn’t surprise her that Marlena (Deidre Hall) turned up alive, she was always between them. John asks when Diana saw Marlena.

Diana tells John he and Marlena had a drink together in the square. Diana says she didn’t want to upset Marlena; John assures her she wouldn’t have. John asks what happened to Diana all those years ago. Diana felt guilty for shooting him. Diana tells him he hasn’t changed except for the hair and the name. John tells Diana she seems to know everything about him. Diana wants to know why John is there; he wants to start with Leo. Diana says there is probably a line outside her door wanting to know about Leo.

John tells Diana that Leo was coming on to his straight son. John tells Diana that Leo is making Will (Chandler Massey) and Sonny’s (Freddie Smith) life a living hell and asks her to help him for old times sake. Diana says it’s hard to say no to John, Leo arrives and interrupts their discussion. Leo demands to know what John is doing there. Diana tells Leo that she and John are old friends. Diana tells Leo she used to live in Salem. Leo accuses John of trying to take advantage of his mother. John tells Leo he doesn’t set back and do anything when someone hurts people he cares about and tells him to ask his mother. Diana tells Leo she and John were involved for over two years when she thought he was Roman.

Days of Our Lives John joins Marlena and asks how her day went. John and Marlena discuss Leo’s mother. John tells Marlena that Diana is his ex Diana Coleville. Marlena wonders what Diana wasn’t honest with

her. John says Diana claims to want to spare her feelings. Marlena says Diana must have had Leo soon after leaving Salem. John looks nervous.

Days Of Our Lives Hope And Ted Break Into Ben Room

In the latest #DAYS, Hope desperately tries to find a missing Ciara.https://t.co/ZsCmioRrzb pic.twitter.com/EtNdPXlUoX

Hope asks Marlena about Ben’s visit with her today. Marlena tells Hope that Ben wants to make things right with Ciara. Marlena tells Hope Ben is taking his medication but has missed a dose or two. Hope appreciates the information and promises to let Marlena know when she finds Ciara. Hope says she knows Ben has Ciara, she can feel it. Hope gets a text that Ben has been located and goes after him. Hope and Ted break into Ben hotel room and go through is things. 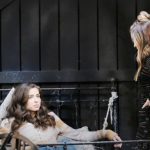 Days of Our Lives’ Ciara is begging for help at the cabin, Ciara’s kidnapper stands there and listens. The kidnapper keeps touching Ciara’s face as she begs them to let her go. Ciara thinks the kidnapper is going to set her free, but they gag her instead. Ciara continues to struggle to get free. Jordan (Chrishell Stause) uncovers Ciara’s eyes; she thinks Jordan is there to help.

Bold and the Beautiful Spoilers & Recap Monday, February 4: Reese Reveals To Zoe He Is Leaving Town