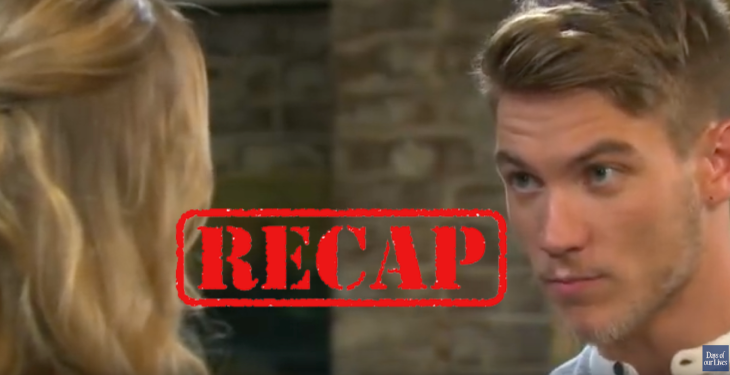 Days of Our Lives (DOOL) recap for Friday, March 22, 2019, reveals Lani Price (Sal Stowers) and Eli Grant (Lamon Archey) are at the police station discussing Haley’s Chen (Thia Megia) situation. Eli tells Lani about a friend of his that was deported as well.

Lani doesn’t like what is happening to Haley. Lani says Haley is a good person and doesn’t deserve this. Lani and Eli kiss and Lani gets ready to leave. Lani meets J.J. Deveraux (Casey Moss) in the square, and she asks about Haley. J.J. says he tried to come up with other solutions. Lani asks if those solutions could keep Haley in the country. J.J. says yes, and Lani says maybe they can be together. J.J. tells Lani he and Haley can never be together again.

Days of Our Lives Spoilers: Claire Lies To Tripp

Days of Our Lives’ Tripp Dalton (Lucas Adams) tells Claire Brady (Olivia Rose Keegan) he needs to tell her something she’s not going to like. Tripp tells Claire that he is committed to their relationship, but Tripp is going to marry Haley. Claire demands an answer from Tripp and cannot believe this was his idea. Tripp tells Claire this will be easier than Haley getting involved with J.J. Tripp is determined to marry Haley whether Claire agrees or not. Claire decides to support Tripp in this, and they kiss. Haley comes home, and Claire sings “here comes the bride.” Haley apologizes to Claire who pretends to be ok with the situation and hugs her.

Days of Our Lives’ Gabi Hernandez (Camila Banus) asks Brady Black (Eric Martsolf) how their plan worked out. Brady tells Gabi that Leo Stark (Greg Rikaart) and Stefan Dimera (Brandon Barash) are sitting around trying to figure out what the hell happened. Brady tells Gabi it was funny how Stefan fell for the plan. Gabi and Brady congratulate each other. Gabi gets a text from her boss and says she needs to see him, Gabi leaves to see what Stefan wants.

Stefan catches Brady and Chloe in an intimate moment, while Ciara gets up close and personal with Ben in the hospital. Watch Days of our Lives, weekdays on NBC. pic.twitter.com/KUWx8MXeY3

Gabi arrives, and Stefan accuses her of giving inside information to Brady. Gabi denies helping Brady and tells Stefan she would not sabotage the company that is her livelihood. Stefan tells Gabi that Shen might have got her job back once, but they will cut ties if it is discovered that Gabi is helping the enemy. Stefan threatens to take Gabi away from Ari (Sydney and Harper Udell) again. Gabi slaps Stefan, and he tells her she will never do that again. Gabi tells Stefan not to threaten her or her child again, or she will take him out.

Days of Our Lives Stefan is at his chess board when Leo walks in demanding what he deserves for the information Leo passed onto Stefan. Stefan grabs Leo by the throat and ass Leo what he is trying to pull. Stefan accuses Leo of helping Brady screw him over. Stefan says he hired Leo to do one job and he messed that up. Leo goes to the Dimera mansion and attacks Brady over the false information. Leo threatens to go to John Black (Drake Hogestyn) because Brady isn’t supporting his brother, Brady accuses Leo of wanting John’s money. Brady tells Leo to leave John out of it; he needs to concentrate on Marlena Evans (Deidre Hall). Leo comes to Marlena’s room demanding to see John, Brady follows and apologizes to Marlena.

Days of Our Lives Diana Cooper (Judith Chapman) comes to Marlena room to see what John wanted to discuss with her. John shows Diana a photo of Kristen Dimera and asks if Diana saw her at the hospital. Diana goes to the police station and pretends to be a reporter to get information on the fingerprints from Marlena’s IV bag. Eli wants Lani to move the IV bag from the evidence room to Hope Brady’s office, and Diana hears this. Diana seems pleased that she may get a chance to get her hands on the evidence. Diana breaks into Hope’s office to find John with the evidence. John asks Diana if that is what she’s looking for and shows her the IV bag.

Days Of Our Lives Spoilers: Haley Runs From J.J.

Days of Our Lives’ Haley tells J.J. Deveraux that she is marrying Tripp to protect both of them. Haley says Jack Deveraux will never stop coming after them if they get married. Haley believes marriage to Tripp will be cleaner and cause fewer problems for everyone involved. J.J. accuses Haley of hating him, and that is why Haley refuses to marry him. J.J. and Haley kiss and he tries to convince her to marry him Haley leaves saying she is going to marry Tripp instead.