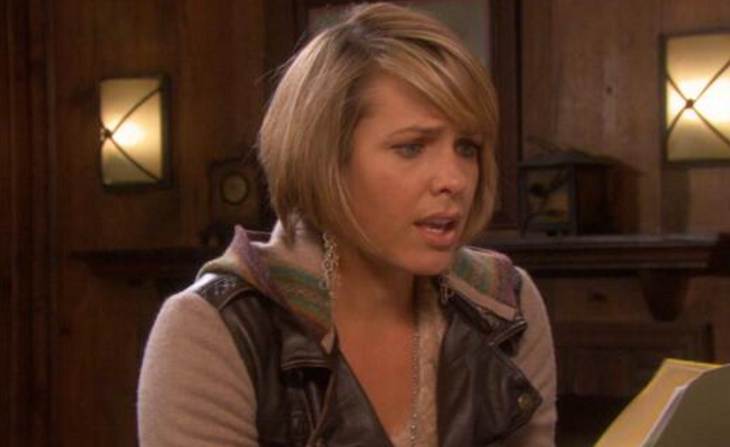 Days of Our Lives (DOOL) spoilers tease that Nicole Walker (Arianne Zucker) will soon be back on canvas. Her return date, currently scheduled for April 25th, is quickly approaching, so Nicole will soon be back into DOOL drama.

Nicole was presumed dead in the Memphis warehouse fire that also allegedly claimed the lives of Kristen DiMera (Stacy Haiduk) and Xander Cook (Paul Telfer). It’s since been revealed that Xander survived the explosion, but so far no one has put two and two together and realized that if Xander survived, then there’s a good likelihood that Nicole survived as well.

Xander was pretty obsessed with Nicole back then, so he likely saved her from the warehouse right before the explosion, perhaps via some secret DiMera passageway in the building. Or, Nicole could have found a way out on her own, only to have been intercepted by Xander on the way out.

The details of Nicole’s return to Days of Our Lives aren’t yet known, but she’ll surely come back with a couple of big goals in mind. She’ll want to track down Eric Brady (Greg Vaughan), her true love, and reunite with him.

But even more so, she’ll want to reunite with her daughter Holly Jonas (Harlow & Scarlett Mallory). The two have now been separated for several months, and she’s likely out of her mind with worry about her daughter.

Nicole may not be happy to find out what’s happened with her daughter since she’s been gone. Right before the explosion, Nicole asked Eric to take care of her daughter. But after Nicole’s death, Eric agreed that Chloe Lane (Nadia Bjorlin) should be the one to raise Holly. That itself probably wouldn’t bother Nicole too much, but Chloe’s life circumstances haven’t been exactly ideal lately.

Days Of Our Lives Spoilers – Will Nicole Become A Ferocious Mom?

Chloe’s got El Fideo’s (Andoni Gracia) men after her, and she was nearly murdered by them at Doug’s Place. Thanks to Stefan DiMera (Tyler Christopher), her life was spared. El Fideo’s men backed off for a while, but it seems that Chloe’s again in danger. And that prompted her to move into the DiMera mansion with her son and Holly.

And according to Days of Our Lives spoilers, Chloe will be under a new attack soon when gunfire erupts at the DiMera mansion. An assassin attempts to kill Chloe but mistakenly aims for Ciara Brady (Victoria Konefal) instead. It looks like it will be unclear whether this is an El Fideo attack or an attack by someone new. But it will be clear that Chloe and those around her – including the kids – are in danger.

Days Of Our Lives #DOOL Spoilers: A Tug Of War For Marlena's Soul – Is Deidre Hall Staying In Salem? @SoapOperaSpy https://t.co/o4lQHJtq8v

Nicole just might have a problem with Chloe raising Holly, given all of these scary developments. So Chloe might get a piece of Nicole’s mind when she comes back and realizes how much danger her daughter has been put in. Nicole might also be unhappy with Eric and Maggie Kiriakis (Suzanne Rogers) for allowing Holly to be in harm’s way. We just might see ferocious mom Nicole return big time!

General Hospital Spoilers: How Far Will Kristina Go To Prove Her Loyalty To Shiloh?