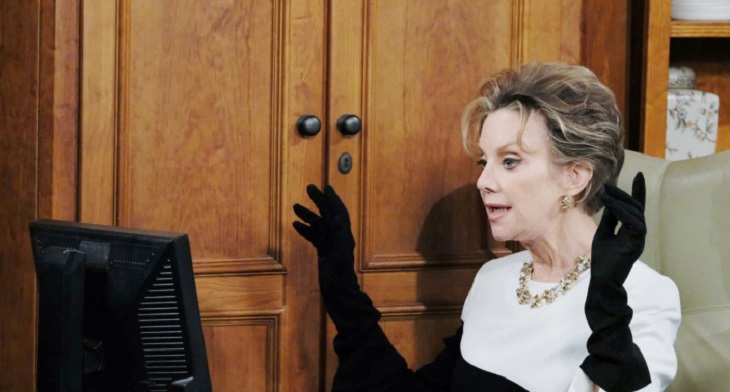 Days of Our Lives spoilers for Monday, March 11, tease that Diana Cooper’s (Judith Chapman) deadly plan will take shape. She’s determined that the only way to score John Black (Drake Hogestyn) for herself is to eliminate Dr. Marlena Evans (Deidre Hall) permanently. Thanks to that search on Marlena’s computer, Diana knows exactly how to make it happen.

DOOL fans can expect some devious moves in Monday’s episode. Diana will bake a batch of cookies, which will be loaded with penicillin. Of course, that’s what Diana learned Marlena is highly allergic to. “Days of Our Lives” spoilers say Diana will be sneaky about how she delivers this lethal gift. She’ll put the cookies in Marlena’s office and cover her tracks with a pleasant note.

Diana will make Marlena believe these cookies are from a grateful Haley Chen (Thia Megia), so Marlena won’t suspect foul play. “Days” spoilers state that Marlena will munch on a cookie or two, which means a life-threatening situation is ahead. Marlena will soon find herself unconscious on the floor and in desperate need of medical attention.

In Diana’s hotel room, Leo Starke (Greg Rikaart) will catch John doing some snooping in that safe. He’ll fear the worst since John will have his hands on incriminating proof against him. Fortunately, John is an easygoing guy who always likes to find a peaceful solution. He’ll sit down for a crucial conversation with Leo and make him see that he’s been vindictive.

Leo will agree to drop the charges against Will Horton (Chandler Massey) and Sonny Kiriakis (Freddie Smith), so that’s excellent news. It seems John may divulge Diana’s paternity claims during his chat with Leo, which will be another interesting development. Leo certainly won’t be opposed to the idea of a great man like John being his real father.

Over with Jack Deveraux (Matthew Ashford), he’ll find a way to get to Haley through Tripp Dalton (Lucas Adams). Claire Brady (Olivia Rose Keegan) will act like she’s completely in the dark when Haley is arrested. However, that won’t stop Tripp from wondering if Claire’s been stirring up trouble! “Days of Our Lives” spoilers say a heated confrontation’s coming up later this week.

Days Of Our Lives Spoilers: Brady Cautions Rex About Eric’s Past https://t.co/yWzMKpEz9y pic.twitter.com/zNM8PpHvbZ

“Days” fans won’t want to miss these gripping scenes. We’ll give you updates as other details and rumors emerge. Stick with DOOL and don’t forget to check Soap Opera Spy often for the latest “Days of Our Lives” spoilers, rumors, updates and news.