Days Of Our Lives Spoilers, Monday, June 10: Sonny Pressures Eve For Diary– Will Proposes– Tripp And Haley Are In Trouble — Ben Traps Claire 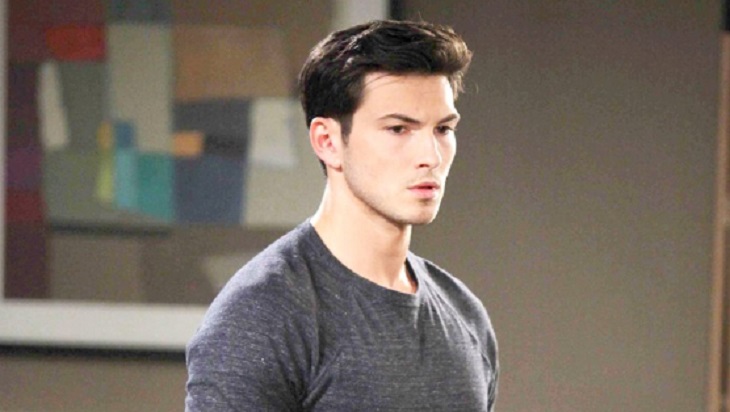 Days of Our Lives (DOOL) spoilers for Monday, June 10 promise more drama and conflict among the Salemites as several situations begin to come to a head! First, Sonny Kiriakis (Freddie Smith) pressures Eve Deveraux (Kassie DePaiva) for Dr. Wilhelm Rolf’s (William Utay) diary, threatening to kill her if she doesn’t hand it over!

Of course, he doesn’t know that she doesn’t have it anymore and that Xander Kiriakis (Paul Telfer) does; will Eve cave and admit she did have it at one time, but that it disappeared again, or will she reiterate to him what she told John Black (Drake Hogestyn)?

Maybe she’ll cave enough to tell him she was looking for it in Seth Burns’ (Ken Colquitt) office to help Jack Deveraux (Matthew Ashford) but it was already gone!

Next, a frantic Ben Weston (Robert Scott Wilson) rushes to Smith Island after realizing Claire Brady (Olivia Rose Keegan) was the firebug that started the first fire Ciara Brady (Victoria Konefal) almost burned up in, and figured she was on her way to meet the same twisted justice to Haley Chen (Thia Megia) and JJ Deveraux (Casey Moss) are there in the cabin clueless of the fate that could befall them!

Days Of Our Lives Spoilers: How Far Will Kristen DiMera Go To Win Brady Black?

Ben, of course, doesn’t know that JJ’s okay, although, in police custody, Tripp Dalton’s (Lucas Adams) is in a whole heap of trouble there with Haley!

Will Horton (Chandler Massey), being told he may have only a few days to live because of the aggressively growing brain tumor caused by Dr. Rolf’s amnesia serum, decides to make the most of what time he may have left and proposed marriage to Sonny. Can they get the ceremony done quickly enough to beat the tumor?

In the latest #DAYS, Claire makes a drastic decision in a fit of rage.https://t.co/ZsCmioRrzb pic.twitter.com/c3tXYWP32h

Rafe Hernandez (Galen Gering) sets an amorous Lani Price (Sal Stowers) straight after she gives him a passionate kiss at his home, where she has been staying fulltime and helping care for baby David Ridgeway (the Ellis Twins) since Rafe was shot in the arm.

Days Of Our Lives Spoilers– Tripp And Haley Are In Trouble!

He sets her straight that he’s not interested in her that way and also helps her to realize that she has become obsessed with the baby and subconsciously replaced her own baby David, who she and Eli Grant (Lamon Archey) lost while Lani had to have a mandatory operation about a year ago.

Meanwhile, out at Smith Island, Tripp and Haley are trapped and passed out from smoke inhalation in the Horton cabin while Eli and other first responders race to save their lives, in addition to Ben trying to get there in time.