Days Of Our Lives Spoilers: Jack Pulls A Dirty Trick During The Mayoral Debate 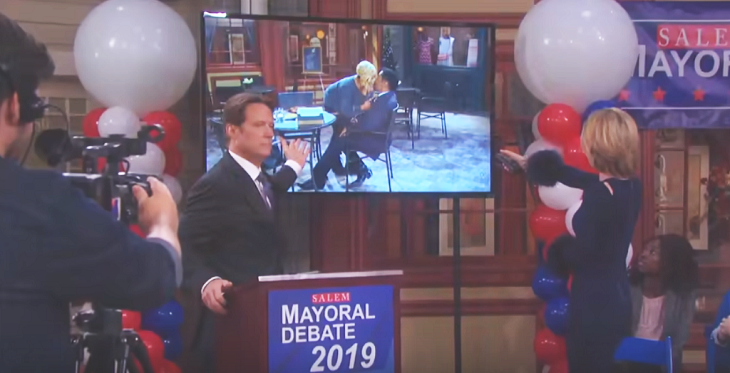 Days of Our Lives spoilers tease that Jack Deveraux (Matthew Ashford) will pull an embarrassing stunt – read that “dirty trick” – during the mayoral debate.

He will happen to see Abe Carver (James Reynolds) and Sheila Watkins (Tionne Watkins) testing the waters of romance by kissing, and he’ll not only take a picture, he’ll make it public, in a very public way!

Sheila is concerned about Abe trailing in the polls, and suggests being a married candidate may help the numbers. Abe tells her that he and Valerie Grant (Vanessa A. Williams) are in a bad place, so that won’t work.

Days Of Our Lives Spoilers – Argument About A Kiss

They argue a little bit about who had tried to kiss who, and Sheila wonders if that’s why he kissed her and he says she tried to kiss him.

Jack overhears this also, but only part of it. Abe covers to Jack, but later he tells Eve Donovan (Kassie DePaiva) that there’s something going on between Abe and Sheila. Of course Sheila has a prison record so Eve will have a heyday playing that up!

“Mudslinging” is an old and vicious habits some politicians have of trying to win elections.They dig up or create unfavorable dirt on their opponents to distract voters away from their own unfavorable dirt or bad records.

Days Of Our Lives Spoilers – Jack Deveraux Is Not Spotless

Jack, of course, has amnesia, but if Salem voters went back many years they would find that his own daughter, Abigail Deveraux DiMera (most recently Kate Mansi) developed aplastic anemia as a baby thanks to water pollution by Jack’s own company. There was also a history of rape. So for Jack to try to mudsling Abe, as the saying goes, that would be the pot calling the kettle black!

Jack grew up in a political family, having been adopted as a small child by former Senator Harper Deveraux (Joseph Campanella). So if he had his memories he’d know what the political game is all about.

Days Of Our Lives Spoilers and Recap Monday, April 29: Xander Is Ted’s Partner – Stefan Lashes Out At Ben https://t.co/kMY5w4VZZR pic.twitter.com/KqDRhjRARN

But blowing up his picture of Abe and Sheila kissing and showing it on a gigantic screen at the mayoral debate is pretty low. It would even seem low for Eve, but spoilers say this is Jack’s idea, not hers.

General Hospital Spoilers: Trina Reaches Out To Cameron As Oscar Passes Away