Days of Our Lives Spoilers: Grief Stricken Chloe Stunned To Find Stefan & Gabi In Bed Together

Days of Our Lives (DOOL) spoilers tease that Chloe Lane (Nadia Bjorlin) will soon get an unpleasant surprise. She’s been living with Stefan DiMera (Brandon Barash) ever since the cartel started threatening her and the kids. As DOOL viewers know, Chloe, Holly Jonas (Harlow and Scarlett Mallory), and Parker Jonas (Christian Ganiere) moved in and Stefan has been playing family with them ever since.

But now Holly has allegedly been killed in an accident, and Chloe is beside herself with grief. Stefan, who has been romantically interested in Chloe, has been helping to comfort her through this terrible time. But that’s not all he’s been doing. He’s also been having a sleazy affair with Gabi Hernandez (Camila Banus).

As DOOL viewers know, Gabi has made it her mission to seduce Stefan, with the ultimate goal being to marry him, then divorce him and take him for every penny that he’s worth. Turns out it wasn’t that difficult for her to get him into bed, and the two of them have gotten to the point where they can’t keep their hands off of each other.

So, Stefan has been caught between trying to manage his relationship with Chloe and helping her grieve while sneaking in trysts with Gabi on the side. It’s been a real struggle for him, and he’s nearly been caught on more than one occasion. 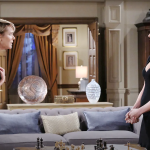 Well, according to Days of Our Lives spoilers, Stefan is about to be caught big time. Here’s how it’s going to go down. DOOL spoilers say that Gabi will enlist the help of Kate DiMera (Lauren Koslow) in destroying Stefan’s relationship with Chloe. Gabi will want Chloe to dump Stefan, but she won’t want to look like she’s responsible for it, because that might disrupt her plan to eventually marry Stefan.

And then shortly thereafter, Chloe will “accidentally” catch Gabi and Stefan between the sheets. Whether Kate has anything to do with this remains to be seen, but it will happen right after Kate gets involved in the situation, so chances are, she’ll have a hand in Chloe’s find.

Of course, Chloe is going to be stunned to find Stefan with Gabi, and she’ll surely feel betrayed and used, and maybe a bit foolish for believing in Stefan. She’ll probably be bewildered that Stefan was seemingly so interested in having a relationship with her when he was bedding Gabi. But no matter what she’s feeling, she’ll probably be out of the DiMera mansion faster than fast.

Days Of Our Lives Spoilers – Warnings About Stefan DiMera

It’s hard to imagine Stefan doing or saying anything that could patch things up with Chloe at this point. She certainly had plenty of people warning her about getting involved with Stefan, one of whom was Brady Black (Eric Martsolf). Perhaps she’ll get back into Brady’s orbit now that she won’t be interested in Stefan anymore.

At any rate, it looks like this will be the end of the line for Stefan and Chloe. Are you sorry to see them come to an end?

Young and The Restless Gina Tognoni Moving On, Ready For ‘Newer And Richer Experiences’