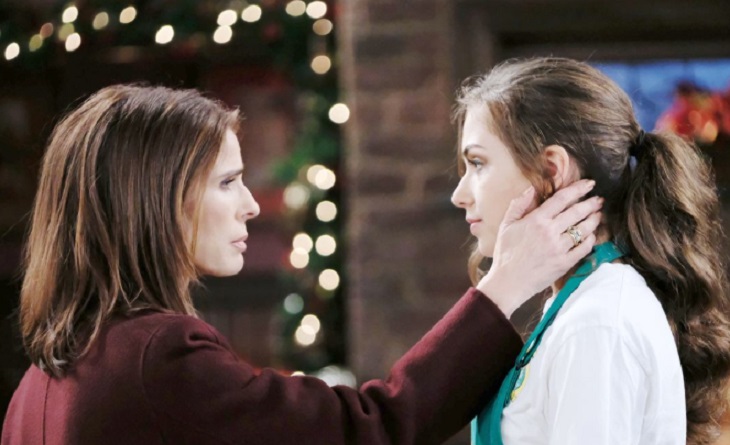 “Days of Our Lives” spoilers for Friday, January 4, tease that Jack Deveraux (Matthew Ashford) will call Eve Donovan (Kassie DePaiva) out on her deception. He’ll bring up Jennifer Horton’s (Melissa Reeves) claims and suggest that Eve wasn’t giving him the real story. Jack’s in a vulnerable state right now, so he won’t appreciate all the lies. He has to be able to trust Eve, but that trust has been shaken.

Of course, Eve will argue that Jenn’s just trying to turn Jack against her. She’ll assure Jack that she’s the only one he should be listening to. “Days” spoilers say Jack may still have his doubts about Eve, but she’ll manage to reel him back in. Jack’s come to rely on her, so he won’t want to believe Eve could be twisting the facts for her benefit.

Days of Our Lives Spoilers – Abigail Lashes Out

Over with Abigail Deveraux (Kate Mansi), she’ll lash out at Chad DiMera (Billy Flynn) for his betrayal. Abigail thought she could expect Chad to have a little faith in her. Instead, Chad put his faith in Gabi Hernandez (Camila Banus) and her bogus alter accusations. Although Chad’s deeply sorry for his mistakes, that won’t be enough for Abigail. She won’t be ready to just forgive and forget.

“Days of Our Lives” spoilers say Chad will face Abigail’s tirade, but he’ll also try to keep hope alive. He knows they could still have a great life together if they could just get past this. Chad will work hard to get their romance back on track in the coming weeks. DOOL fans will be anxious to watch Chad pull out all the stops!

In the meantime, “Days of Our Lives” spoilers say Rafe Hernandez (Galen Gering) will shock Stefan DiMera (Tyler Christopher). He’ll make a startling arrest, so Stefan will be taken to the police station on espionage charges. Despite Stefan’s insistence that he’s innocent, Rafe will thrilled to lock him up. He’s eager to put Stefan behind bars however he can, so he’ll urge Stefan to save it for the judge!

Days of Our Lives Spoilers – Ciara Gets Bad News

It sounds like another exciting episode’s coming up. We’ll give you updates as other “Days” news and rumors emerge. Stick with the NBC soap and don’t forget to check SOS often for the latest “Days of Our Lives” spoilers, rumors, updates and news.