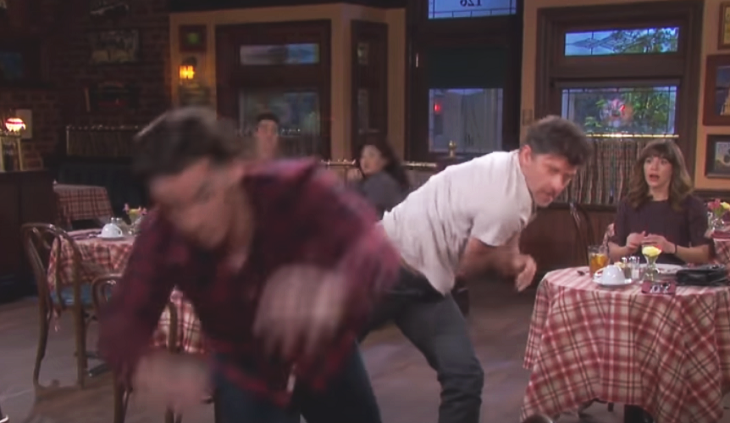 Days of Our Lives spoilers tease that Eric Brady (Greg Vaughan) will be sitting with Sarah Horton (Linsey Godfrey) in Brady’s Pub, having a sit-down meal and likely talking over recent events, when Xander Kiriakis (Paul Telfer) strolls in.

The Days of Our Lives weekly preview shows Eric rising from the table when he spots Xander. He literally knocks him off his feet with a blow to the jaw!

Days of Our Lives viewers know this has got to be about Nicole Walker (Adrienne Zucker) and her presumed dead toddler Holly Jonas (Scarlett and Harlow Mallory).

Days Of Our Lives Spoilers – Xander Cook The Cause And Effect

Other spoilers say that Xander will put the moves on Sarah. But he is walking towards Eric and Sarah, not away from them in this scene. The audio doesn’t indicate any wolf whistles or the like coming from Xander as he approaches them either. Eric just jumps up and decks him! 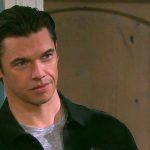 Eric likely blames Xander as the cause and effect for the whole scenario leading up to Holly’s presumed death. If Xander hadn’t forced Nicole to marry him, if he hadn’t been with Nicole and Holly in the warehouse that exploded, etc., Holly wouldn’t be (presumed) dead and Nicole wouldn’t have rejected Eric! Obviously, a lot of anger has built up in Eric towards Xander, and rightly so.

Of course, Eric does not yet know Xander is behind Holly’s kidnapping and that the crash didn’t kill her or the kidnapper. It was set up by Xander and Ted Laurent (Gilles Marini) with two dead bodies from a morgue in it.

Days Of Our Lives Spoilers – No Autopsy Or DNA Requested

Either the vehicle was a self-driving one and remotely controlled, or there were two and Rafe Hernandez (Galen Gering) followed the decoy vehicle. It was likely rigged to explode and burn as well.

As Days of Our Lives viewers recall, no autopsy or DNA was requested of the two burned bodies to identify them for sure, as Stefan DiMera (Brandon Barash) also questioned. Rafe didn’t actually see the kidnapper put Holly into the car either. He only assumed it was the kidnapper with Holly after he heard a baby crying.

Based on that, the crash was assumed to have killed both the kidnapper and Holly. Eric is too distraught and Nicole as well to even request exact identification by DNA. But it’s possible the bodies were too badly burned to get viable DNA from anyway.