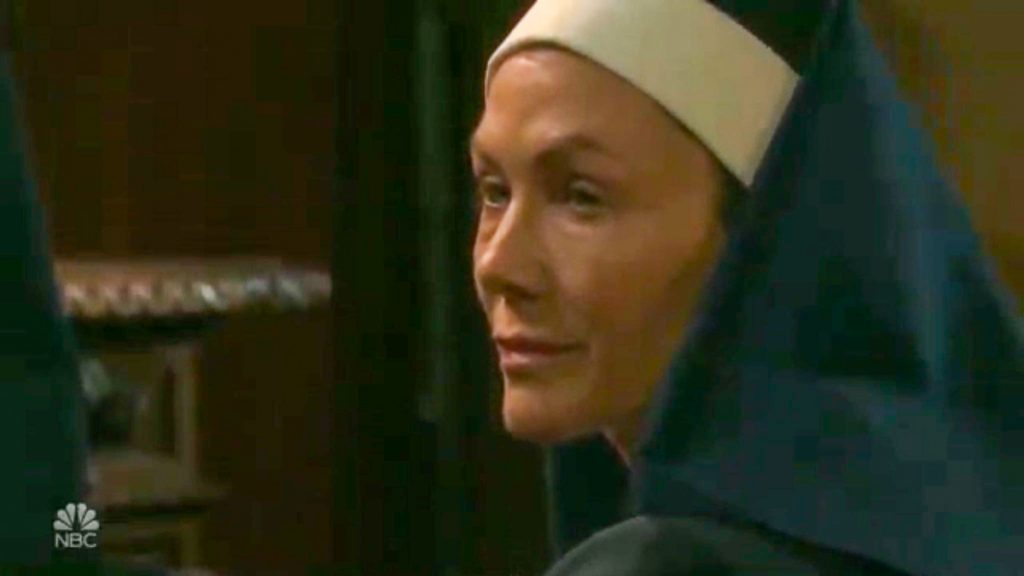 Days of Our Lives spoilers reveal JJ Deveraux (Casey Moss) blames Kristen DiMera (Stacy Haiduk) for Haley Chen’s (formerly Thia Megia) death. However, she was cleared of all charges. Despite her being cleared, the soon-to-be-nun feels guilty about the nurse’s death. So, what exactly happened?

DOOL spoilers reveal Brady Black (Eric Martsolf) briefly discussed Haley’s death. The only thing he really said is that Kristen was accused of murdering Haley, but was cleared by the authorities. He didn’t go into detail, but this made fans believe that for once, Kristen was actually innocent. However, things after the time jump are not quite that simple.

JJ insists that Kristen is guilty of murder and will stop at nothing to find her location. He plans on discovering where she is hiding out and confronting her. Basically, he plans on doing the same thing to Kristen that she allegedly did to Haley. However, Jennifer Horton (Melissa Reeves) is right. If he doesn’t find forgiveness in his heart, someone is going to get hurt.

Days of Our Lives spoilers reveal Kristen offered a little more detail to what happened with Haley. Even though she didn’t mean to hurt the nurse, something tragic happened. As a result, Haley ended up losing her life. Kristen feels a lot of remorse for what happened that day. She is determined to turn her life over to God, pray daily and do nothing but good deeds to try and atone for Haley’s death. But if she was cleared of murder charges, then what exactly happened?

Days of Our Lives Spoilers: Ciara Snoops to Discover Xander's Secret – But Is She Prepared for the Disturbing Truth? @celebratesoaps #DOOL #DAYS #DAYSOFOURLIVES https://t.co/id40v3W8A6

The only clue we have is that the death happened right after Kristen found out her newborn baby was dead. Perhaps Kristen had a type of stillborn psychosis and she lashed out after discovering her daughter died? It’s the only thing that makes sense. She might have thrown things around the hospital room, and Haley might have been caught in the crossfire.

Kristen’s guilt indicates that Haley’s death happened as a result of her actions. However, her being cleared of murder tells us that it wasn’t intentional. This is the only thing that makes sense. However, is there any way to convince JJ that Kristen doesn’t deserve to pay with her life?

The Bold And The Beautiful Spoilers: Brooke Makes Final Call On ‘Bridge’ Marriage – What Will She Decide?