Days Of Our Lives Spoilers: Claire Furious When Eve Tries To Renege On Their Deal 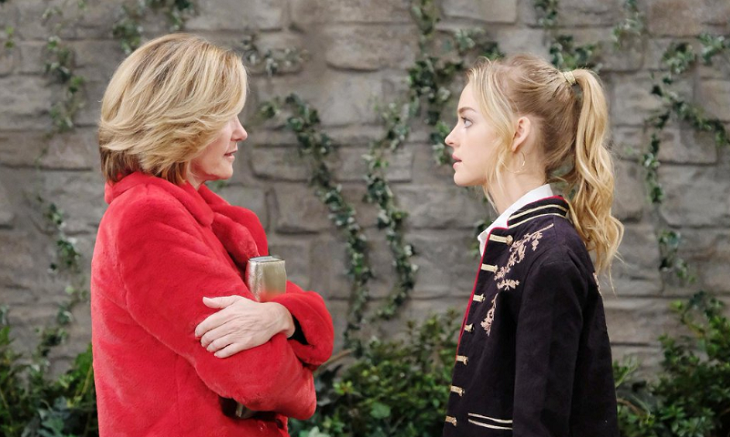 Days of Our Lives spoilers tease that Claire Brady (Olivia Rose Keegan) will be upset when Eve Donovan (Kassie DePaiva) tells her there will be a change of plans in her efforts to get Haley Chen (Thia Megia) deported. Claire wants her out of her life and away from her boyfriend, Tripp Dalton (Lucas Adams).

What change of plans might Eve have in mind that would upset Claire so much? Eve gave her the idea to record Claire and Tripp together in the Salem Inn, and even paid for the room.

Claire herself wasn’t wild about staying the night at the same motel where Jack Deveraux (Matthew Ashford) and Eve live. And earlier in the day at the loft, when JJ Deveraux (Casey Moss) heard about the plan, he was against it as well.

After Jack and Eve showed up, to congratulate Tripp on the wedding, JJ was even more against the idea of their staying there. Haley called Tripp to warn him about Jack and Eve’s suspicions that the marriage was going to be legit, and not just a “green card wedding”, which was obvious! 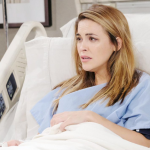 Days Of Our Lives Spoilers: Jordan Asks Rafe For A Huge Favor – Race To Rescue Baby David Is On

Eve planned to play the video publicly, at a press conference, where everyone in the public who watches the news or reads the paper would be informed that Haley and Tripp’s marriage was a fake. ICE (Immigration and Customs Enforcement) would know about it too.

Claire is in such an anxious state, thinking she’ll lose Tripp to Haley, that she didn’t even think far enough ahead about the potential consequences to Tripp. He is harboring an illegal immigrant and set up a green card marriage.

JJ had earlier warned that Tripp could get arrested if found out, citing his sister Abigail’s (Marci Miller) green card marriage to Dario Hernandez (Jordi Vilasuso) and that she nearly went to jail over it. Longtime Days of Our Lives viewers should recall those episodes.

But as Eve is playing the video from Claire and Tripp’s romantic get together (which it appears at least Claire had the presence of mind to shut the recorder off before any clothes came off!) and tells Jack they need to call a press conference, Jack says no.

Days of Our Lives #DOOL Spoilers: Will's Mysterious Illness, Rex's Desperate Search For Answers Before It's Too Late @celebratesoaps https://t.co/CWJXnDJBBg

This is probably the change of plans that Claire will be upset about, because it was the only way to prove that the marriage was not based on a real loving relationship. Stay tuned to Days of Our Lives and keep checking Days of Our Lives spoilers frequently to see all the latest news, updates, and spoilers!

This Is Us Spoilers: Pearson Family Goes Back To The Future